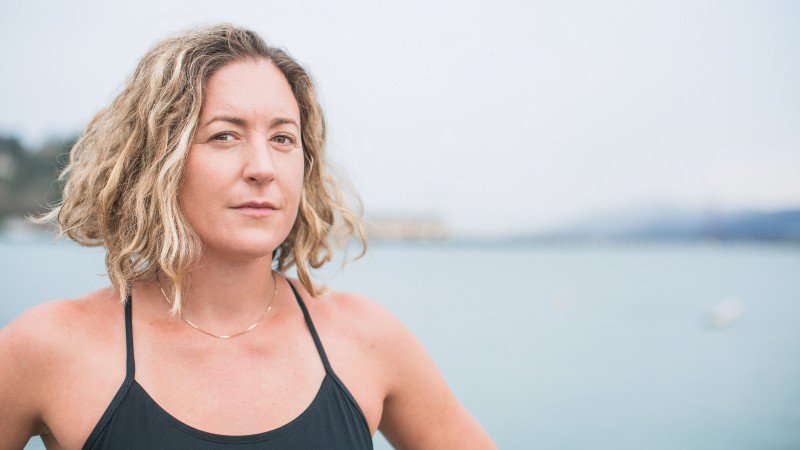 Photo of Kimberley Chambers by Kate Webber for Outside Magazine.

It is pretty cool to start a swim in one country and finish in another.

The Strait of Gibraltar (Spain and Morocco), the Dead Sea Swim (Jordan and Israel), In Search of Memphre (USA and Canada), Xiamen-Kinman Swim (China and Taiwan), and Pan-American Colibrí Swim (USA and Mexico) are all examples of cross-border swims.

Melissa King who has participated in a number of swims as a swimmer and kayaker along the California coast from the Catalina Channel to the Farallon Islands is continuing her international open water journey in the Pacific Ocean with the Pan-American Colibrí Swim between Imperial Beach, California and Playas de Tijuana in northern Mexico.

She is joining by 11 other swimmers and a flotilla of support crew in the 10 km example of Speedo diplomacy by a group of ocean swimmers from five nations with the purpose to raise awareness and funds for the Colibri Center for Human Rights in the Pacific Ocean.

Pan-American Colibrí Swim between Imperial Beach, California, USA and Playas de Tijuana Mexico is a 10 km cross-border swim and example of Speedo diplomacy by a group of ocean swimmers from five nations with the purpose to raise awareness and funds for the Colibri Center for Human Rights in the Pacific Ocean.

Daily News of Open Water Swimming: Why do you want to participate in this swim?

Melissa King: I want to participate in this swim to feel like I am contributing something toward bringing an end to the unbearable situation we have with respect to fellow human beings imperiling themselves in order to cross the border into the US from Mexico.

People are dying in their quest to get here and build better lives for themselves or their families. What excuse do I have not to go swim a few miles in recognition of their struggle and their suffering? If I could do more to recognize them and hold them – especially those we’ve already lost – I would.

This is a nation of immigrants. When, along the trajectory of someone’s family’s immigration history, do they forget and stop being able to say “there but for the grace of (pick your deity) go I” when they see a “foreigner” suffering in their backyard?

So few people will stand up for the most vulnerable. We have a few titans who have truly done this over the centuries, putting everything they had toward that goal. My contribution will be small, but part of a larger whole – this group of swimmers and supporters and the Colibrí Center — that just might move the needle. Those of us involved will now be hyper-aware of these issues and can continue to carry the message forward to try and make change.

One more reason, and it feels almost separate, but my Mom was an immigrant to the US from Latin America. Granted, she came in a totally different way, with her parents paying for her to go to graduate school here and live in a home in a very nice neighborhood, much like she did in her privileged life in her own country. Yet she still faced her share of people being ignorant about where she came from and saying preposterous, inappropriate things to her.

Luckily, more people were kind and helpful an intrigued by her history, and happy to employ her in the professional roles matched with her education, rather than behaving like the ignorant few. The negative aspects of my Mom’s immigrant experience were mild, and almost funny, compared to someone coming here highly vulnerable, with no resources and asking for the most menial of jobs. My Mom and I shared many a laugh over some of the ridiculously stupid things some people said to her years ago. However, it was still frustrating – and likely painful – for her at the time, and upsets me to think about all these years later, more than 40 years after she became a US citizen. I can only imagine the pain of having what I know are much, much worse immigrant experiences than my Mom’s.


Daily News of Open Water Swimming: Are you looking forward to the swim?

Melissa King: Yes, I am very much looking forward to this swim. I haven’t done a swim like this in a while given my work travel schedule, and was looking for a good reason to do one other than just fun and challenge. I search for mission-driven opportunities in my work, and feel lucky to find meaning in what I do recreationally – it drives me more.

Melissa King: Crossing this particular border has huge significance for me as someone from the USA (I won’t say American because people from Latin America and Canada are also “Americans”), and for me as a Californian. These are our neighbors. Sovereignty over much of the “local” land has traded off over time (as recently as 1848, all of California was part of Mexico), and let’s not even get into the actual natives and who took what from whom, when and how.

People from Mexico and other countries in Central and South America, but primarily Mexico, have been part of the California economy for a hundred years and though US citizens never did and still don’t want to do the agricultural or restaurant or cleaning jobs done largely by immigrants (legal or otherwise, they are the ones doing this work), many Mexican immigrants are still not treated well and not appreciated for the work they do.

And yet the rhetoric about “Mexicans stealing our jobs” still holds water in some quarters.

It’s not up for debate. Let’s face it. People of Mexican descent are many things in the US now: they are workers in jobs most people don’t want, they are legal immigrants and green card holders and residents and citizens, they are members of our communities, they are our neighbors both inside the US and across the border. And many of them die trying to cross the border into the US, either to come back to lives, businesses and families they had already established here, or to build better lives for themselves and their families – and again, often by doing jobs most people don’t want to do.

What are we doing letting them die crossing the border, unnecessarily?

It doesn’t have to be this way.

We need their labor in our economy for it to work they way those making the most money want it to work. Why can’t more of them admit that publicly and help end the death machine that we allow border crossing and the shameful coyote system to be?

Daily News of Open Water Swimming: Is there anyone in the group who you have not met before and who you wish to meet and swim with?

Melissa King: Yes, I’m very much looking forward to meeting all of the swimmers that I have not yet met. They all have such inspirational stories, and I know they are putting a lot into making this swim a reality – all in the name of recognizing and helping some of the world’s most vulnerable people. What’s not to love?

King paddled for the chief ambassador of the swim, Kimberley Chambers, who is shown above and was recently highlighted in Outside Magazine. Read about her involvement in the Pan-American Colibrí Swimhere.