King Of The Bays Gets Rich 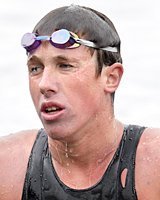 The richest cash prize in the history of New Zealand swimming is on the line this weekend at the 2.8 km State King of the Bays event.

The final round of the 6-race State New Zealand Ocean Swim Series goes from Milford Beach to Takapuna Beach. The best open water swimming talent from both sides of the Tasman have been going at one another throughout the summer in the Southern Hemisphere.

“The field for the King of the Bays will be the strongest it’s been, with thrilling conclusions in both the men’s and women’s series.” Rotorua’s Kane Radford leads the men’s series and has confirmed he will be swimming despite recent surgery for appendicitis. The illness forced him to miss the last round, the State Sand to Surf, but Radford still heads into the series finale with a narrow lead over Auckland’s Phillip Ryan. Without early leader Trent Grimsey in the picture, the 20 Grand is still up for grabs. Because points from just three of the six races count, and because double points are given in the finale at the King of the Bays, the final standings will be markedly different to what the currently are.

For example, if Australia’s two-time Olympian Ky Hurst wins the State King of The Bays, he will secure the maximum 400.00 series points, and surf past everyone to take home the $20,000 cash prize. Motivation is strongly on his side. “The money will into a bank account that I’ll be opening for my four-month old son,” said Hurst.

In addition to the men’s leaders shown below, 1,600 swimmers will take to the water in the race’s 10th anniversary.