King Shows No Empathy In The Open Water 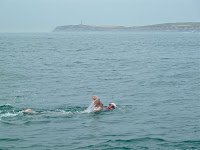 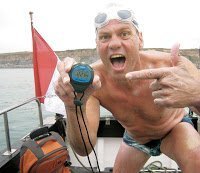 The Big Moment in everyone’s open water swim (race or solo channel crossing) is different, profound and memorable for the individual. For many marathon and channel swimmers, triathletes, newcomers and others, they estimate the sport is 70-90% mental and 10-30% physical with smaller elements of fate, teamwork, nutrition/hydration, acclimatization, weight gain, rest and navigation making up the rest of the total equation.

At certain moments of both successful and unsuccessful swims, there are often specific seminal moments that determine the ultimate outcome of their swims. These Big Moments can be a natural event (e.g., change in tides or an decrease in winds), a mental decision (e.g., to ignore the cold or the sting of jellyfish), a physical feeling (e.g., a reduction in shoulder pain or a determination that the water is not cold), a pre-swim motivational talk (with a friend during training), or quite simply the taste of a home-baked chocolate chip cookie in the middle of the ocean.

Rod Craig explained his Big Moment during hour four of his solo crossing of the English Channel in 12 hours 21 minutes in 2010:

“I was cold. Mentally, I could not comprehend another 8 hours in this temperature (14°C or 57°F). I wanted to give up. It took my pilot (Andy King of the Channel Swimming Association) to keep me going. He has taken over 100 people across so in my mind he had the know-how. Andy came out of his cabin at this particular feed during Hour 4 and asked one question. “Are you cold”?

I said no for some reason and he responded with, “You’re not even shakin’ man Put on your goggles and lets go!

This really pissed me off and sent me away full of self-pity and frustration. The very next feed I said nothing to my crew or Andy and kept moving. I was still pissed. Before I knew it, the sun started to shine and the water warmed up one degree to 15°C. This was all it took to keep me on track. From that moment, I was on a mission to get myself to France.

Basically, Andy showed no empathy and this was exactly what I needed – amazing