Koz Paddles For A Cause 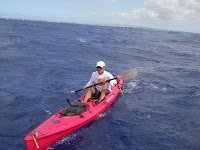 Jeff ‘Koz’ Kozlovich paddles like few others. He paddles not for himself, but for others. Among his selfless duties, he has paddled for Penny Palfrey twice each in the Kaieiewaho Channel (between Kauai and Oahu)and the Molokai Channel (see video below) and in the Cayman Islands, and for Darren Miller also in the Molokai Channel.

Like the Secret Service, he wears shades while paddling and is as protective, diligent and focused as a human can possibly be while paddling on his long board next to his swimmers.

Not only does Jeff paddle and guide his swimmers straight as an arrow, but he also understands the ocean and subtly positions his swimmers to take advantage the the ocean swells and currents.

With the 50-year-old extreme athlete, fitness trainer and Hawaiian lifeguard on their sides, swimmers rarely have anything to worry about. He lets them shine and do what they do best as he quietly hauls bags, helps with the pre-swim preparations, sleeps very little and does all the behind-the-scenes work onshore and on the escort boat that is necessary to achieve success.

In support of the Blue Planet Network, Jeff did his own adventure in an effort to raise money for the clean water projects. His 2,817-mile Race the Sun is a combination run-bike-swim-paddle in and around the Hawaiian Islands.

Inspired by Katie Spotz, 21-who rowed 2,817 miles across the Atlantic Ocean and raised US$100,000 for clean drinking water, Jeff thought he would match her mileage and raise money for the Blue Planet Network too. “I have a family (three kids, two in college and one at home), a full-time job as a lifeguard on the beaches of Oahu and a business as a fitness coach. I cannot take three months off. I was feeling a bit of envy while watching a video of Katie shortly after she completed her adventure when I saw the number of miles she rowed – 2817 – and got an idea. I spent an hour or so with Google Earth and a calculator and figured it was just barely possible, just the kind of challenge I like.”