Kraving For Food In the Open Water 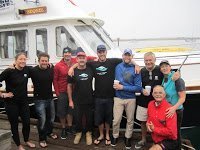 How did the Night Train Swimmers prepare for their SF to SB Relay, a 6-day swimming adventure along the California coast?

How does a group of swimmers handle their nutritional and sleeping needs while swimming in cold water for an hour every 6 hours for 6 days as they swim non-stop from San Francisco to Santa Barbara?

Day in and day out, morning and night, the Night Train Swimmers were a well-oiled machine.

They were so prepared and so ready that the weak link turned out to be mechanical part on their escort boat. It was not a shoulder that gave out. It was not a lower back that gave way. The group was immune to seasickness and it was the boat that required repairs.

Food (fuel), drink (hydration) and sleep were essential to their success. “The food was fantastic and right on the mark in terms of protein and carbohydrate mix,” recalled Patti Bauernfeind. “The hot food was really helpful for getting our body temperatures back to normal especially during the night swims. All of us ate something hot while sitting in the “sauna” aka the boat bathroom with a powerful ‘lil heater.

A couple of us used Gu or had some type of bar or had a few gulps of a protein drink during our [one-hour] night swims. For me, that added some calories and a chance to interact with someone both at 20 and 40 minutes during the hour swims. I found that with the sleep deprivation, I was more aware of the water temperature so it was a huge psychological boost to take something in on the feeding interval that I use for solo swims.”

One of the keys to a smooth-running machine was how all the pieces (people) fit in terms of personality and the ability to deal with stress and sleep deprivation. Everyone had their role and responsibilities. Both before and during the 6-day swim.

Patrick Horn and swimmer Phil Cutti served as the team chefs. “Our plan was based on getting each swimmer and crew member calorically-dense individual hot meals that they could heat up in the microwave or boiling water. we wanted good food, not manufactured freeze-dried crap. Patrick and I took over our kitchen for a week. Each meal was cooked, packaged or vacuum-sealed and frozen. The first couple of day’s meals were not frozen.

Each swimmer and crew member had 3 square meals a day. Lunch and dinner were labeled with day, meal and swimmer/crew name. In the morning, Patrick would take out the day’s meals and put them in a 5-gallon bucket on the back deck to thaw out throughout the day. It was a simple system once all the work was done.

We planned for 7+ days with a total of 153 individual meals. Breakfast was not individually packed and consisted of hard-boiled eggs, sausage and bacon. We would do breakfast differently by adding oatmeal or something similar to the options. Plus, each swimmer brought plenty of snacks: Krave, chips, trail mix, food bars, etc. We had a good amount of food

Horn knew that proper food and hydration were critical. “We believed that eating real, hot food was going to be really important to the swimmers both physically and mentally. We wanted to make sure that each meal was 500-700 calories and had plenty of good fat. We also looked at low glycemic loading foods so that after a meal the swimmers were not spiking and crashing.

All meals included at least one animal protein with fat and green vegetables. An example is chicken, sweet potatoes and broccoli. We also had chicken and beef stews. This was supplemented with swimmers own snakes and Krave jerky (also a low GI loading food). As Phil explaine, all the food was cooked before hand, separated into individual portions, vacuum sealed, labeled and frozen. Each swimmer would heat there food in the pouch in the microwave, eat and then throw away the pouch eliminating mess.”

Captain Vito Bialla had his favorite food on board. “We consumed KRAVE jerky daily. It is a fabulous product. Patti lives on it and it is one of the fastest growing companies in the consumer world.”

In addition to the fuel and hydration, the teamwork and camaraderie that developed and was maintained onboard were surely key ingredients of not only the Night Train Swimmers’ success, but also a common element of major marathon swimming expeditions. From the Windermere 12-way Warriors to the Lake Taupo 3-way Relay, and from Penny Palfrey to Martin Strel’s multi-national crews who assist ultra-marathon swimmers from the Cayman Islands to the Amazon.