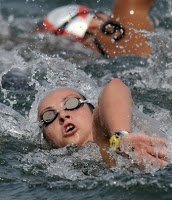 Kristel Köbrich, who tried to double up in the 800m and 10 km at the 2008 Beijing Olympics, is focusing her aerobic talents on the pool for the 2012 London Olympics.

The Chilean superstar and crossover athlete heading to her third Olympics is foregoing the 6-loop 10 km marathon swim for the 16-lap 800-meter freestyle.

“In those (Beijing) Games we were also in the open water (race) and that was tough, a learning curve seeking immediate responses. At the time, it was sad and painful (but) we picked ourselves up quickly,” the former Chilean Olympic flagbearer told Reuters.

“Today I’m in a position to choose knowing I’m in good shape and that nothing can distract me. I’m going for it. To be in the final would be historic for me and my country (Chile).”