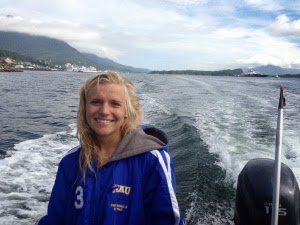 The last time we followed young Kristin Jones from Juneau, Alaska, she was winning a slew of races in the Lower 48 States in all kinds of venues. She won the women’s title at the WOWSA World 10-mile Swimming Championships in Vermont, finished the 12.3-mile Swim Around Key West in 5 hours 16 minutes, won the 10 km Sitka Sound Adventure Swim and the 8.2-mile Pennock Island Challenge in Alaska as she raised money for the Friedreich’s Ataxia Research Alliance.

Her 2014 campaign in the continental U.S.A. began in the state of Arizona where she finished first among the women in the 4 km Tempe Town Lake race, the first of the three Arizona Open Water Swim Series. She will also participate in the upcoming S.C.A.R. Swim Challenge and the third series race in June in Lake Pleasant, both in Arizona.

“The first 300 meters [in the Tempe Town Lake] were scary,” the Alaskan swimmer writes. “It was a new experience for me. I was pushed under, grabbed, boxed in, cut off, pulled backwards – I hadn’t planned to take off so fast right away, but it was almost a necessity to get away from the brutality. After about 3 or 4 minutes of the thrashing, most of the group began to fall back, but I still had someone on either side of me and they both kept swimming inward, towards me. It was claustrophobic, but I held on until the first turn buoy to stop and make a move toward the inside of the two swimmers. I was able to drop one of the swimmers over the next few minutes, but found myself also being dropped by the leading female swimmer. I was already at my planned pace so instead of pushing forward with her, I settled in for the next 2000 meters.”

She finished in 54:26 and was very happy with the results. “I definitely feel a little confidence boost in regard to my S.C.A.R. training. This race was very different as it was only a 4K and took me less than an hour, but my tactical skills and open water technique got some good practice.”

For more information on Jones and her faraway swimming from home for charity, visit here.