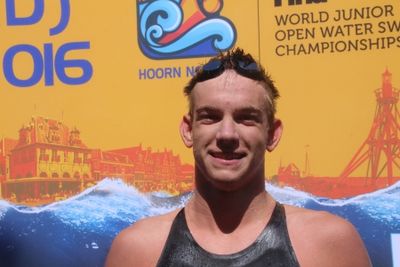 “Setting the world record [in the 1500m freestyle] will definitely be one of the goals that I will try to achieve in the current season,” said 2016 Olympic gold medalist Gregorio Paltrinieri to FINA as he prepares for the 2017 FINA World Championships in Budapest, Hungary this July.

But the Italian champion is also throwing in a bit of open water training to his preparation mix.

The Hungarian team, however, was intent on standing on top of the awards podium in the opening leg of the LEN European Open Water Swimming Cup in Eilat, Israel.

Veterans Kristof Rasovszky of Hungary [shown above] and Kirill Abrosimov and Evgenii Drattsev, both of Russia, swam just fast enough to finish ahead of Paltrinieri.

On the women’s side, Katalin Somenek replicated her male teammate’s victory.

Paltrinieri, who won Olympic, world and European titles in the 1500m freestyle over the past three years, returned to the open water. He had regularly participated in open water swimming competitions up until the age of 16 when he turned his focus to the pool.

Confident in his stamina and speed, Paltrinieri swam in the lead pack but Hungary’s junior world and European champion Rasovszky switched to another gear, winning by 19 seconds while Russians Abrosimov and Drattsev held off Paltrinieri.

“I enjoyed the race after all, managed to keep up with the others for most of the time,” said Paltrinieri. “In the last lap I felt as if I was losing the necessary energy to go with the leaders and I fell behind. Still, it was a good experience, totally different from pool swimming, but I learnt a lot here.”

Rasovszky was beaming after the competition. “It was a fine race, I enjoyed every minute of it. It was a tough fight for four and a half laps, at the end I managed to break away and build a gap which secured a calm finish.”

LEN Operational Manager Marco Birri described the revamped series. “We really wish to offer something new and definitely something even better for our athletes. The series will enjoy a refreshed design in venue dressing, all hosts are committed to create the best environment for the participants. The European Cup has a huge potential as the discipline is witnessing a boom. LEN wants to offer outstanding competitions for the continent’s swimmers who are dominating at the world level. They deserve this, for sure.”