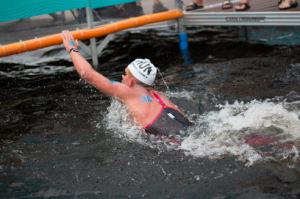 Rasovszky won by 1.8 seconds in 2 hours 6 minutes 46.3 seconds over Italy’s Dario Verani. Matteo Furlan of Italy was touched out by Hau-Li Fan of Canada at the finish for third.

The point-to-point crossing in the picturesque lake was site of Rasovszky’s third victory on this season’s circuit and seventh career victory on the World Series circuit.  “For the first 2K, I was in the back of the pack to save energy, but it didn’t feel good for me. I wanted to know what was happening in the lead. After the 6K feed, I found myself in the lead. I don’t know how.

In the last kilometer, I had a lot of people around me. I started to push more and really show something to the finish.”

Second-place Verani said, “I’m happy with this result because it’s the same as last year and in the first part of the race, I wanted to be next to Kristof because I knew he’s the best right now in this competition.   At the end, I was in the middle [of the pack] and when you are in the middle, it is not good.”

Hau-Li Fan made his countrymen proud with a photo-finish to finish third.  Fan led the race through the first several kilometers, and is not accustomed to swimming in a tight pack.  He trains in a pool in Vancouver, usually by himself, and is entering his fifth year of studies at the University of British Columbia.