Older generations often tell younger people of the tremendous trials and tribulations of their youth and how much more difficult it was “in their day” than it is currently in contemporary times.

As is natural, the younger generations tend to brush off the talk and any mention of the difficulties that older generations faced, believing that these situations are exaggerated.

However, there are exceptions.

In the case of the 24-hour La Tuque Swim, the older generations of marathon swimmers do not exaggerate when they describe the difficulty of this race. In fact, if anything, they downplay the tremendous efforts that they put themselves through in this famous race in Canada that is no longer held. 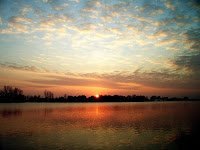 The first Marathon de 24 Heures de La Tuque was held in 1965 in Lake Louie, a spring-fed lake in Quebec, Canada. Lake Louie is a small circular lake surrounded by a sidewalk and grass areas that provided excellent viewing of the entire lake.

The course itself was also circular and marked by buoys along the ⅓-mile length.

One full circumnavigation of the course was ⅓ mile. The race was a 2-person relay where one swimmer could swim as many laps as he/she choose as long as at least one lap was completed. The relay members could only change at the partner-changing dock.

The Swim was inspired by the famous 1963 60-mile (96.5 km) race across Lake Michigan when Egyptian Abdul Abou-Heif beat Chicago’s Ted Erikson. The Who’s Who of open water swimming in the 1960’s and 1970’s flocked to the incredible race of endurance. The International Swimming Hall of Fame Honor Swimmer, Horacio Iglesias of Argentina won the race a record six times.

In 1980, Paul Asmuth and James Kegley finished 1-2 in the professional Around-the-Island Swim in Atlantic City, New Jersey and were invited to Lake Louie as the team to beat.

“James and I each swam a mile at a time. The day was cool and raining and water low 60°s. The night was very cold and there was a bunk house to go into to try and warm up in the twenty minutes between shifts.”

In a typical display of stamina typical of those pioneering days, the race organizers paid for an Egyptian swimmer to swim by himself for 24 hours. Paul fondly remembers his stout competitor, “…the cold did not affect him. He had those old style scuba goggles on and he would smile and wave underwater each time James and I passed him; it was a very funny sight. It was something to look forward to during the monotony of the night when the spectators went home around 2 am.”

Because the race was organized as a commercial venture by the local chamber of commerce, there was a festival next to the lake and many spectators throughout the race except for 2-6 a.m. Labatt Brewery was the main sponsor and, as Paul and James recall much beer was consumed.

As Asmuth and Kegley pushed themselves to exhaustion, there was not much competition so they focused on breaking the record of Olympian John Kinsella and his Indiana University teammate Bill Heiss. Kinsella and Heiss had previously swum 203 laps. By the 24th hour of the 24 Heures La Tuque, Asmuth and Kegley had swim 207 laps of Lake Louie or about 69 miles total (34.5 miles or 55 km each).

Asmuth recalled, “James ended up swimming one lap further than me because I needed a little extra rest during the night and he was a great friend for that.”

Throughout the race, Asmuth and Kegley never let up and relied on each other to motivate each other. “We wrote notes to each other to communicate how we felt and there was a lot of humor as I recall,” said Kegley, also an inductee in the International Marathon Swimming Hall of Fame and All-American from Indiana University. “I think we questioned our sanity at some points, particularly at around 3 or 4 am when the bands had stopped, the people had passed out or gone home and the only sign of life were the few officials and other swimmers.”

But, the men were serious about breaking the Kinsella-Heiss record and never let up during the lonely hours of the late night/early morning. “We had to tag each others hands before plunging in off the floating platform and since we were going for a record, we didn’t stop to chat,” said Kegley. “The hard part was just beginning to get warmed up and then hopping back in. It was surreal watching the sun come up and seeing people around 7 or 8 am drift in, all the while painfully aware we had been swimming all day and night. I seem to recall someone brought in donuts in the wee hours.”

Photo of Lake Louie by AnaB*.