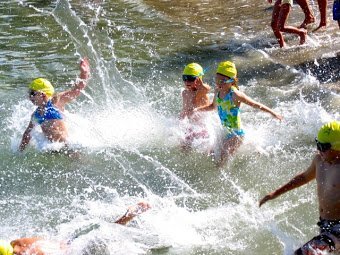 If you want to get away from the hustle and bustle of city life, there is arguably no better place to escape than Kauai, the Garden Isle of Hawaii.

Thousands of miles away from the nearest continent in the middle of the Pacific Ocean, Kauai takes mellow to a whole other dimension.

Now under the leadership of Kawika Dela Sierra, the event is an example of how mellow meets Aloha Spirit with a healthy dash of fitness fun.

The Hanalei Bay Swim Challenge on July 27th is a great opportunity for the keikis and masters swimmers to ratchet up their competitive juices where open water swimming passion overflows like mai tais at pool side bars.

The event is a charity swim on the North Shore where vivid greens meet bright blues. The event includes 4 separate races: 2 around-the-pier races for children and 2 longer cross-bay swims for teenagers and adults (1 km and 3 km).