Larisa Ilchenko Chosen As Open Water Swimmer Of The Decade 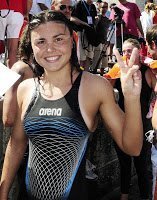 At the 2007 World Championships in Melbourne, Larisa said, “Yesterday, everyone was so kind and friendly. Everyone was wishing each other good luck. Today [the day of competition], all the smile were wiped off. It was a fight from the first moments of the day.”

Over the next decade, the battles will undoubtedly continue.