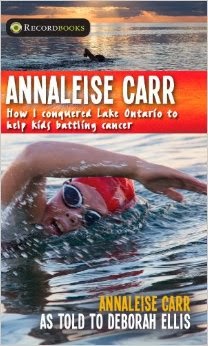 On August 19th 2012, Annaleise Carr completed a charity swim across Lake Ontario that raised nearly a quarter of a million dollars.

“I followed the traditional Marilyn Bell route from Niagara-on-the-Lake to Marilyn Bell Park near the CNE in Toronto,” said the 2012 World Open Water Swimming Woman of the Year. “I became the youngest person to complete the swim, as well as the youngest person to join the 24 Hour Club which includes all swimmers who do a marathon swim for 24 hours or longer. My crossing took an incredible 26 hours and 41 minutes through grueling and wild conditions.”

Her swim raised awareness for Camp Trillium and childhood cancer. Her original goal was to raise $30,000, but she went far beyond that goal having raised well over $200,000.

“Now, 2 years later, I am releasing my book “Annaleise Carr: How I Conquered Lake Ontario to Help Kids Battling Cancer” that I wrote with award winning author, Deborah Ellis.”

Readers and interested fans can enter an online contest to win a free book by Carr.

Read about the remarkable teenager who is now training for her next charity challenge in another Great Lake: Annaleise’s Radical Crossing 2.0. “On July 26th, I will take on Lake Erie in another swim – Erie, Pennsylvania to Port Dover, Ontario which is 75 km. If successful, I will set the world record for the longest swim across Lake Erie, topping the old record by approximately 20 kilometres. Once again raising donation for Camp Trillium, for children with childhood cancer and their families.”