Leaving A Legacy After Swimming In Sydney 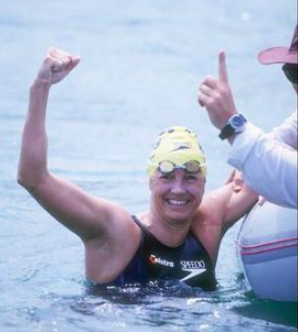 Similar to Greta Andersen, she became one of the very few women in history to collect prize money for both the first place overall and first place in the women’s division.

“In the 20th century, men and women raced against each other in pro marathon swims. Women from Judith van Berkel-de Nijs to Sandra Bucha had been competitive against the world’s best men in head-to-head races.

But no women had ever before been ranked number one at the end of a professional marathon swimming season
,” said Steven Munatones. “Shelley changed the sport to create separate divisions for the genders.”

“It was history making — I went to IMSA number 1 ranking overall as its marathon swimming champion and it led to the governing body creating fair play with separate rankings and equal prize money,” remembered Taylor-Smith. “This is my legacy for women in sport that I am most proud of.”