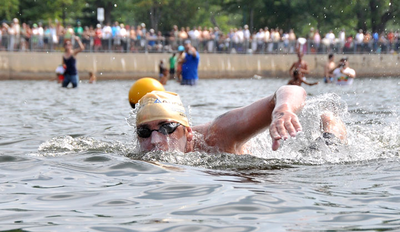 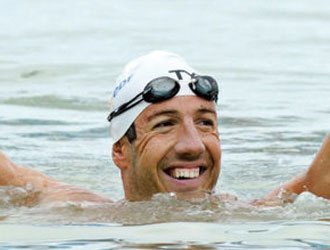 Before 1955, no one had attempted to cross the 27-mile (43 km) lac Memphrémagog in Québec, Canada, in a solo marathon swim.

Situated located between Newport, Vermont in the USA and Magog in Québec, a local Sherbrooke swimmer Lamontagne Lorenzo made the first attempts. On July 9th 1955, the 24-year-old swam for 21 hours 30 minutes before being pulled from the water 2 miles from his goal.

Five weeks later on August 21st 1955, 19-year-old William Francis Billy O’Connor became the first person to complete a crossing of lac Memphrémagog in 18 hours 35 minutes, swimming from south to north despite a storm that hit near midnight.

O’Connor took a 10-minute break every hour to replenish his energy and power. After walking into lac Memphrémagog at 4:30 pm, and braving a night storm, he finished in Magog at 11:05 am.

Eventually, the Traversée internationale du lac Memphrémagog added a number of amateur open water swimming races in addition to the professional marathon swim and became a stalwart in the FINA Open Water Swimming Grand Prix. The events included le grand marathon 34 km, Parcours 2 km Pro Am, le grand défi 3 km, le 10 km distance olympique, L’épreuve du 1 km, la course des Petits Memphrés (for kids 4 to 11 years) and la super course à obstacles where 50% of the course was on land and 50% of the competition was in the water with 12 stations and challenges scattered around lac Memphrémagog.

The Traversée enjoyed decades of success, but was forever changed because of the terrorist attacks in the United States on September 11th 2001. The 34 km cross-border swim from Vermont to Québec was halted in the aftermath of 9-11.

The cross-border race created an unusual situation for the swimmers. Before the 2003 race, professional marathon swimmer Mohammed Hassan from Egypt had taken three months to obtain a visa to enter the United States for the competition.

But, the Department of Homeland Security told Hassan that his name was on an FBI list. Because of this, Hassan was not be allowed to swim out of the United States and into Canada, but he could leave by any land exit point. The ruling was resolved when the Department of Homeland Security said Hassan could swim across the border as long as he agreed to report back to a U.S. border as soon as the race was over…which is what he did.

But the race was forever changed to an out-and-back course starting and finishing in Magog, an entirely domestic course.

The competition continued until 2017 when the final decision was made to end the 37-year-old legacy in the lac for financial and operational reasons.

Any swimmers, coaches, pilots or volunteers who participated in the Traversée between 1979 and 2016 who would like to be interviewed about the history of the event, please contact [email protected].

“I recall the exciting and controversial finish of the 2013 Traversée Internationale du lac Memphrémagog,” said Steven Munatones. “It was a tight race after nearly 34 km between Olga Kozydub of Russia, Silvie Rybarova of the Czech Republic, Martina Grimaldi of Italy, and Celia Barrot of France, with Tomi Stefanovski of Macedonia and Alexander Studzinski of Germany in the mix [shown below].

After the athletes rounded the final few turn buoys, they came sprinting down the last 200 meters, but all of them missed properly entering the finish chute.

Once they realized their mistake, they had to U-turn and swim through the finish chute marked by two yellow buoys. Ultimately, it was Stefanovski and Kozydub who finished first among this group after being led astray by Grimaldi