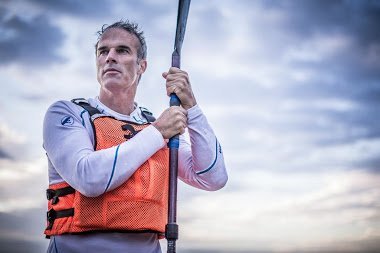 Lewis Pugh will be among the inductees in the 2013 International Marathon Swimming Hall of Fame ceremonies to be held during the Global Open Water Swimming Conference in Cork, Ireland in October.

While he is primarily known for his cold-water swims in Antarctica, across the North Pole, and up 5,200 meters on Mount Everest, Pugh also has a knack for accomplishing the extreme of the unique kind.

Pugh’s talents and commitment to extend himself to the extremes truly stretches his physiological and psychological boundaries. His control over his body with his mind is extraordinary. In order to prepare himself for his cold water swims, Pugh has to acclimate himself over long periods of time as well as undergo anticipatory thermo-genesis just before his icy swims. But he prepares himself to withstand hypothermia and freezing in the same calendar year that he also prepares himself for the opposite extreme – hyperthermia and overheating in warm water.

How he handles these two extremes in both air and water temperatures is mind-boggling and unprecedented.

In 1992, he not only swam 25 km in 32°C (89.6°F) water across Lake Malawi in Africa, but he also successfully swam the English Channel. While this 15-17°C water temperature difference is tough, it was only the beginning of Pugh’s ability to stretch himself at both ends of the thermometer.

In 2007, Pugh probably took the human body as far as it could possibly stretch in the open water. Not only did he complete a 10-day, 140 km unprecedented stage swim across the width of Maldive Islands in 30°C (86°F) water, but he also completed an unprecedented 1 km swim across the North Pole in -1.7°C (28.9°F) water in 18 minutes 50 seconds. This variance – nearly 32°C or 57°F in the same calendar year – is unprecedented and truly stretches the imagination how flexible the human body can be trained and how far the human mind can push the body.

Pugh’s accomplishments that will be honored by the International Marathon Swimming Hall of Fame at the Global Open Water Swimming Conference: