Life Is About Extremes For The Tampa Bay Frogman Swim 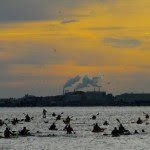 TAMPA BAY. Rory O’Connor explains why he organizes the 5 km Tampa Bay Frogman Swim on January 8th across Tampa Bay, Florida. “The answer lies at the very heart of the event.”

In 2009, Navy SEAL Lt. Dan Cnossen lost both legs and sustained numerous internal injuries as a result of a combat mission in Afghanistan. For Dan, it merely presented a new challenge to be overcome with his typical can-do attitude. From his arrival at the Naval Academy when he was barely able to swim to the point he became a Navy SEAL, Dan was always moving upwards on a lifetime trajectory of challenges.

Within four months of sustaining his injuries, Dan competed in a half marathon with an indomitable attitude. His mantra, “Life is about extremes“, is proved repeatedly.

“The original race name was “The Dan Cnossen Toasty Warm Frogman Swim“, but Dan wanted the event to be larger than him. It’s not about him; it is about the team, the men, the families, and the communities that provide the foundation of that team. But it is also about extremes.“

Navy SEAL Commander John Doolittle eloquently explained why he competed without a wetsuit in the cold water and even colder air, “I wanted to make it as hard as possible because I’ll never know the journey to recovery those guys (injured) must endure.” So if you swim or support the Tampa Bay Frogman Swim and feel a bite in the air, or the burn of cold water, remember the swim is an offering to our injured brothers, its spirit must be to the extreme.”