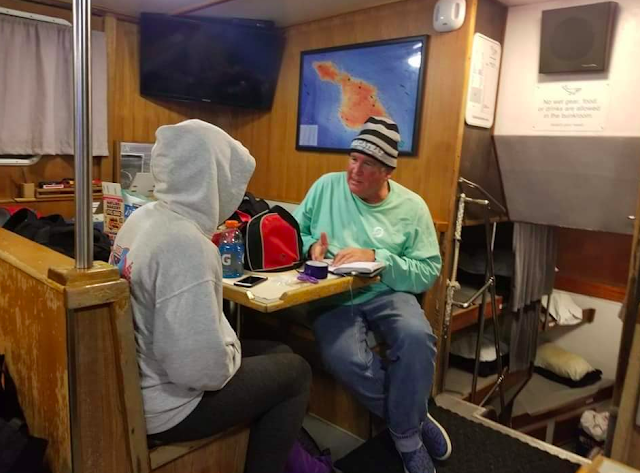 “He has marathon swimming in his blood,” said Steven Munatones. “But his open water swimming philosophy is as simple as they come: Walk in, swim across, and walk out. His mindset is shared by his daughter, Mackenzie.”

She took care of business – as her father has for decades – when she swam from Santa Catalina Island to the Southern California mainland, landing on Terranea Beach in 9 hours 32 minutes. Her father was on her boat, alternatively cheering her on and serving as a pace swimmer.

The Catalina Channel Swimming Federation reported, “She began her swim from Doctor’s Cove on October 8th under a 3/4 moon and in the presence of a sea of salps. Smooth, windless seas and minimal swells complemented her solid performance. She was welcomed to the mainland by some migrating whales and also had a pod of dolphins greet her just a couple hundred yards from shore.

On board, she was supported by a crew of family, friends, and fiancé Jon Davis. Barbara Schumacher and Dawn Niday provided excellent kayak support. At the finish of her swim, she was received on the beach at Terranea by more family and friends. It was a beautiful effort and a fantastic experience.”

In 2003, her father crossed the 32.3 km Catalina Channel from Santa Catalina Island to the Southern California mainland in 10 hours 20 minutes at the age of 49. “I just had to beat my dad’s time,” recalled 29-year-old Mackenzie with a smile – and hug of her father [shown above giving Mackenzie some last minute tips before she entered the channel].

Mackenzie writes, “I can’t even begin to explain how it feels to have the amount of support and overwhelming love I’ve received since beginning this channel swim endeavor. Everyone prior to the swim, to everyone who saw us off the night of, everyone who was there in spirit, over social media, phone calls and texts, those across the world, and those who were on my boat and who came to my finish, I can barely put into words how grateful I am for everyone.

What an experience, I’m so grateful to my support crew, support swimmers, kayakers, observers, boat captain and boat crew, my swim would not have been successful without my support all around, and I thank you all tremendously for it: my parents, fiancé, friends, future in-laws and family, close friends, childhood friends, college friends, new and old friends, colleagues.

The swimming at night never once phased me. I couldn’t have asked for anymore of a perfect crossing for water temp, and wind and weather conditions. Literally perfect.

I had Armageddon It by Def Leppard stuck in my head about 90% of the time and Wilson Phillips the other 10% along playing the movie Bridesmaids because that’s what I watched earlier that day.”