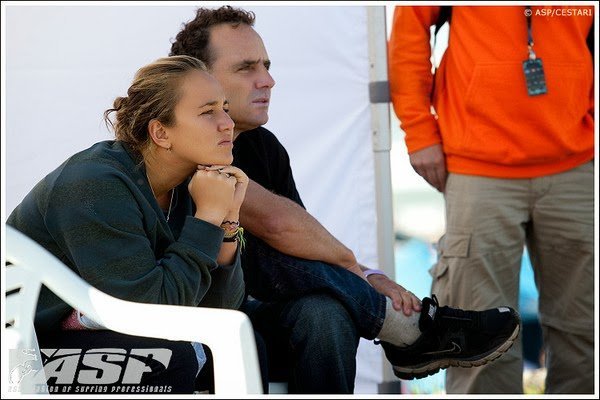 “In high school, I had to go to bed early and not go out as much, but I so much more enjoyed being in the water early in the morning and living a great lifestyle,” explains Carissa Moore about her daily regime.

“My dad, he has been there since the beginning. He has been my coach, my travel companion, and he is the one who really puts me in the right mind frame. [He] tells me the truth and tells me where I need to be for the contest…my dad helps me keep focused.”

And focused she is. The two-time Association of Surfing Professionals women’s women champion was a surfing prodigy who is now fulfilling the expectations placed upon her.

Her father is Chris Moore, an outstanding open water swimmer from Honolulu and a fast former NCAA Division I freestyler who won the competitive Waikiki Roughwater Swim in 1985, 1987 and 1990 over a slew of Olympians and world champions, and placed in the top 3 on three other occasions. He is also the race director for the North Shore Swim Series, a 4-race series of ocean swims on the famous North Shore of Oahu.

With such know-how and experience in the ocean, it is no wonder that Carissa has the DNA to do well in any marine sports. But her choice has been surfing and she has risen to the top with the guidance and encouragement of her father. His knowledge of the ocean dynamics and instinctive feel of the water as an ocean swimmer and casual surfer growing up in Hawaii has obviously helped his daughter.

Where she is going from her is anyone’s guess, but father Chris is sure to be proud along the way.