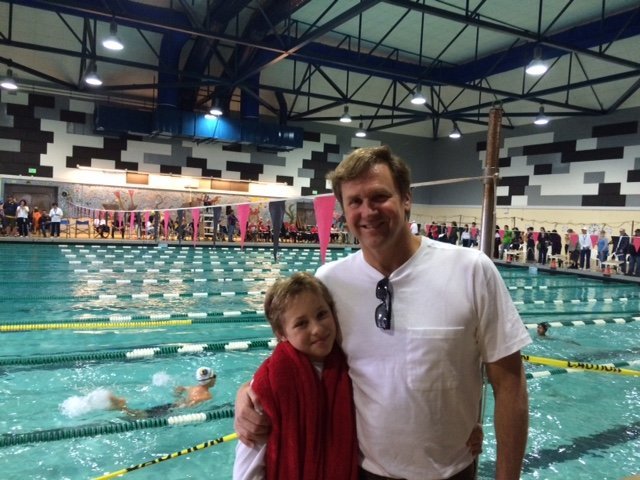 They were all tremendously excited to do the 2015 RCP Tiburon Mile in San Francisco Bay.

But father and race director Bob Placak faced a big problem the day before the event: the tidal flow was too great and he decided to cancel the race for everyone but the elite field.

Not only did Placak have to face telling hundreds of swimmers that they could not do the RCP Tiburon Mile, but he also had to wake up on race day morning and tell young Robert.

Robert got up smiling and running down the hall, excited to participate in the RCP Tiburon Mile. Mother Graciela couldn’t bear to tell him. Dad had to do it. “Robert, we are going to cancel the race except for the elite heat due to the tides. The tides are too strong this year. Are you OK with that decision?“

“Sure. It is going to be OK,” surprisingly answered Robert who added a bright smile as a heartfelt reassurance to his worried father.

Both parents were touched as dad vowed to swim with his son on the next occasion.

Another chance came this past weekend when father and son entered in a USA Swimming age group and senior meet at Chandler High School in Arizona called the Lost Dutchman Invitational. The father-and-son duo entered the 50-yard butterfly.

Robert did some best times in his other events while Placak finished 22nd out of 100 entrants in the 50 butterfly in 25.4. Great job for the young age-grouper and a very decent time for the former Pan American Games two-time gold medalist and national team member.

“I think more swimming parents should participate in these meets,” advises Placak. “It is a great chance to further connect with the family and stay in shape with a pool available for these long 4-day competitive swim meets. It can be an new kind of integrated USA Swimming and U.S. Masters Swimming concept.”

It certainly is cool when fathers and sons, mothers and daughters, husbands and wives, brothers, sisters, cousins and boyfriends and girlfriends participate together in open water swimming competitions. And it is certainly cool that family members can do the same in competitive swim meets.

While we are not aware of another pair of fathers and sons who have competed together at a USA Swimming competition, we believe that many swim parents would want to do the same as the Placak’s in future swim meets. “As long as we are already there as a family, it makes sense,” says father Bob.