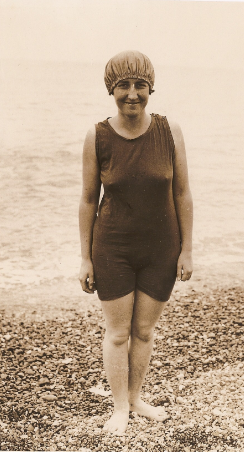 Lilian Gemma Harrison (1904 – 1993) was an Honour Swimmer from Argentina who was inducted in the International Marathon Swimming Hall of Fame in 1973.

She grew up in England and learned to swim in college in Hertfortshire. She later swam for Club Náutico de San Isidro after she moved to Argentina.

It was apparent that she loved to swim.

Her first attempt at a marathon swim took her 21 hours 20 minutes when she swam from Zárate to Tigre, north of Buenos Aires, along the Paraná River.

Then she decided to take on the mighty Río de la Plata which had been attempted nine previous times including attempts by Enrique Tiraboschi, Luis Garramendy, Elio Perez Romero Maciel, and Vito Dumas. Dumas was in the water the longest at 25 hours 17 minutes, while Maciel had to abandon his attempt only 3 km from Berazategui, his point of arrival.

She nearly gave up along the way, but men who had previously failed at their own attempts helped her along as pace swimmers. She slowed at the end until she noticed ships close to her finish.

Ultimately, she swam 48 km across the Río de la Plata from Colonia, Uruguay to Playa Colorada, Argentina on December 21st 1923 at the age of 20 in a time of 24 hours 19 minutes.

Her success prompted her to return to her place of birth and attempt a crossing of the English Channel. In an era when no woman had yet crossed the Channel, she made four attempts in 1924. But all were unsuccessful including her last attempt when she was reportedly close to drowning before her crew abandoned her swim.