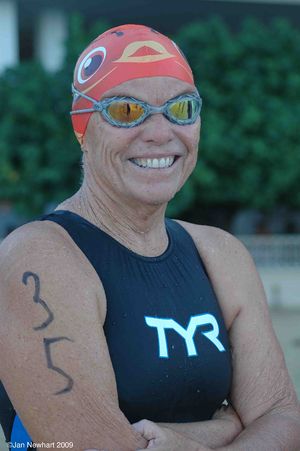 Famed channel swimmer and waterwoman Linda Kaiser was inducted this week into the Hawaii Waterman’s Hall of Fame, organized by the Duke Kahanamoku Foundation.

“It is such an honor to get in this Hall of Fame. Only 3 other women have ever gotten in and I am the first open water swimmer.” But it was not only for her open water swimming between islands that qualified Kaiser as a waterwoman. “I was the first OC2 [outrigger canoe] to cross the Kaiwi Channel between Molokai and Oahu and I have also done some 6-man rowing and one-man paddling around the islands.”

“I am so blessed to swim. I have met amazing people, seen incredible sights, and experienced amazing events all because I am in the water.”

Others being inducted in the Hawaii Waterman’s Hall of Fame are Steve Borowski (for swimming), Bill Smith (for swimming and ocean safety), Tommy Conner (for paddling), and China Uemura (for surfing).