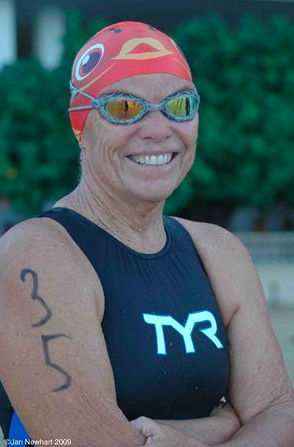 “She was a total champion,” said friend and fellow ocean swimmer Michael Miller which summed up her life and accomplishments on dryland and in the open water.

Kaiser was a multi-talented athlete who competed in 50 marathons, many Half Ironmans, 1 full Ironman, 32 Tinmans (an Olympic distance triathlon), competed in her first Waikiki Roughwater Swim in 1984 when she was 34 years old and later became an event and channel swimming administrator who donated innumerable hours to helping and mentoring other swimmers.

While the Hilo-born swimmer was honored as an Honor Administrator by the International Marathon Swimming Hall of Fame, she was best known in her native Hawaii for her channel swims throughout Hawaii that included the following crossings:

Her friends Cyndia Michelle and Cyndia Lavik produced a short film on her, “Linda is a great storyteller. She had a lot to share with the swim community including explanations of her many shark encounters over the years and her passion for swimming and helping others.”

Fellow Molokai Channel administrator Bill Goding put together a slideshow at her International Marathon Swimming Hall of Fame induction ceremony in Honolulu since she was too sick due to her fight with lung cancer to attend the induction in Old Windsor, England. “A great time was held by all of her close friends including Forrest Nelson who flew over from Los Angeles.”

Kaiser was known as one of the world’s most prolific warm-water channel swimmers and administrators who encountered more sharks during her channel swims in Hawaii than anyone else in the world – and always volunteered her time to help others.

It was during her 1990 Pailolo Channel swim from Maui to Molokai when she noticed a dark shape in the water beneath her. She said the shape was “no larger than a fist at first, but was growing quickly and racing straight [up to the surface] All of sudden I thought, ‘Oh, that’s a shark.’ He just kept coming straight up, and I said to myself, ‘Ooh, this may not be good.'”

But after the 12-foot shark circled her a few times, the shark lost interest.

When she could not attend the ceremony, she sent her own wishes of aloha to the community:

Kaiser recalled her career of crossings, “The most difficult channel was swimming from Kahoolawe to Lanai across the Kealaikahiki Channel. We had probably five different weather and current changes. ]Our escort pilot] had conveniently not told us how far it was. We thought it was around 12 miles, but it was 17 miles; just a long slog.

The most fun crossing was from Maui to Kahoolawe across the Alalakeiki Channel. Even though the swells were 20-30 feet (6-9 meters) high, we literally bodysurfed those swells. It is a 7-mile swim and the swells were with us. The hardest part was getting in our escort boat at the end because it was so rough.

The most beautiful water was between Kauai and Niihau across the Kaulakahi Channel where we were helped by visiting dolphins along the way.

Mentally, the toughest crossing was from the Big Island of Hawaii to Maui across the Alenuihaha Channel. We did it after Mike Spalding got bit [by a cookiecutter shark]. I had lots of thoughts throughout that swim – and there were lots of sharks.

I don’t think any of the channel crossing were easy. Each crossing had its own challenges, whether they were physical or mental.”

Julie Wassel reported this morning from Hawaii, “Linda Kaiser finished her race strong today. She passed away peacefully early this morning December 31st 2018. Keone, Mae and our caregiver Ana were by her side along with Lola and Lillie. She was an integral part of the sports world especially the swim community. Her endurance race lasted almost 2 years and she gave it her all-never stopping even for jellyfish.

Last night she was surrounded by friends who shared stories, laughter and tears. Remembering her as a strong supporter, fierce friend and loving Aunt. Now get out there and swim… Just 5 More Minutes. We love you Linda!“