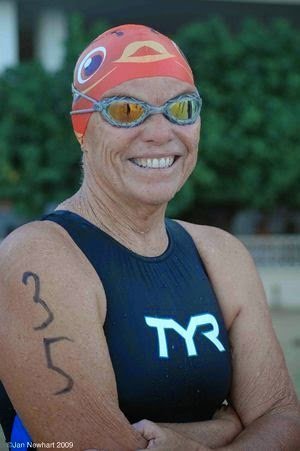 Swim a channel or complete an open water swim nowadays and many swimmers describe their achievement on the social media. There are, of course, exceptions to this norm where a handful of swimmers, renowned among the community of channel swimmers, do plenty of under-the-radar or unannounced swims.

For these swimmers, self-satisfaction and personal success is all that they seek.

But there may be few athletes who have accomplished so much – while seeing so much marine life on their swims – as Linda Kaiser of Hawaii.

In addition to being the first and only woman to date to swim all 9 Hawaiian channels called the Eight Seas, Kaiser founded the Kaiwi Channel Swimmers Association and helps all Kaiwi Channel swimmers in any way that she can, even to the point of hosting them at her home. She also meets all the swimmers whenever and wherever they finish.

She has also volunteered with the Waikiki Roughwater Swim for over 25 years and is the organization’s head of water safety, its treasurer and a member of its board of directors.

A shy, unassuming and humble swimmer, she explained a bit about her 9 channel swims throughout the state of Hawaii. In order, these swims include the following:

Hawaiian Channel #2: 8.4-mile (13.5 km) Pailolo Channel (Maui to Molokai)
November 30th, 1990, 4 hours 47 minutes
“I was the first woman to swim this channel with the water temperature about 78ºF. The ocean was calm in the beginning of the swim, but the wind and chop came up over the last two hours and I saw my first big shark – about 12 feet – that circled me 4 times and then left.”

Hawaiian Channel #4: 7-mile (11.2 km) Alalakeiki Channel (Maui to Kahoolawe)
April 14th 2001, 3 hours 30 minutes
“I was the first woman to swim this channel and the first time that this channel had been swum in this direction. The water temperature was between 76-78ºF with huge ocean swells and howling winds. The swell were 20 feet at times and my escort boat could not get near enough for feeds. I body surfed some of the swells and saw one shark at the beginning.“

Hawaiian Channel #5: 17-mile (27.3 km) Kaulakahi Channel (Kauai to Niihau)
July 20th 2003, 10 hours 45 minutes
“I was the first woman and it was the first time that this channel had been swum. There were dolphins that swam with me off and on. The winds picked up during the second half of the swim with strong currents that pushing away from Niihau over the last 4 miles. We had to swim around the intended landing beach to another beach that wasn’t rocky and had less surf.”

Hawaiian Channel #6: 17-mile (27.3 km) Kealaikahiki Channel (Kahoolawe to Lanai)
September 11th 2005, 11 hours 53 minutes
“This was the first time that this channel had been swum. I was the first woman to swim this channel. There was calm water to begin, but it got rougher by mid-swim. There was a strong current pushing west away from the island [of Lanai]. At one point, it looked as though we might miss Lanai, but our course was correct and we finished just before sunset.”

Hawaiian Channel #7: 26-mile (41.8 km) Kaiwi Channel (Molokai to Oahu)
September 21st 2007, 15 hours 0 minutes
“My first attempt was aborted after I swallowed a jellyfish and had to be pulled from the water with extreme cramping and spasms. I returned to Molokai a week later and swam through the night, finishing north of Sandy Beach. I had very good conditions with the water calm and water. I saw 2 sharks, but neither of them showed any aggression.”

Hawaiian Channel #8: 30-mile (48.2 km) Alenuihaha Channel (Hawaii to Maui)
September 11-12th 2009, 16 hours 10 minutes
“I swam this channel a few months after being on Mike Spalding’s escort boat when he was bitten by a cookie cutter shark. I started in the dark and swam very scared the entire night. There were lots of ‘things’ bumping into me all night and I was very glad to see the sunrise. But then I could also see the sharks. I had 3 sharks come very close while other sharks just swam around under me and kept their distance.”

Hawaiian Channel #9: 72-mile (115.8 km) Kaieiewaho Channel (Oahu to Kauai)
November 20-22nd 2010, 47 hours 55 minutes
“This was done as a 6-person relay and was the first swim crossing of this channel. It was a horrible experience with constant jellyfish stings and very aggressive sharks. It was a horrible current most of the way with light winds and warm water. The funniest moment was at night when the escort boat alerted a tugboat and said we had swimmers in the water. The tugboat captain was speechless and came back a few minutes later, asking our captain to repeat what he just said.”