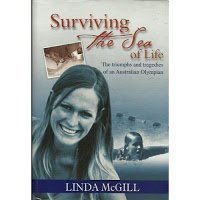 Like many successful Australian female marathon swimmers, Linda McGill MBE faced a variety of obstacles throughout her life before triumphs came in bunches.

Her autobiography, Surviving the Sea of Life: The Triumphs and Tragedies of an Australian Olympian, tells of her repeated victories against fate and roadblocks.

She describes how she survived her mother’s tragic death, how she came back after a scandalous ban from the 1964 Tokyo Olympics; recovery from a near-fatal car accident and a devastating divorce.

Five months after being suspended for 4 years after the Tokyo Olympics, McGill became the first Australian to swim the English Channel in 11 hours 12 minutes. In 1967, she twice successfully crossed the English Channel. Her first crossing was 13 hours 2 minutes, but disappointed she did a follow-up swim and set a women’s record for the swim of 9 hours 59 minutes, a time that came close to beating the current men’s record of 9 hours 35 minutes.

In her book, she writes about her world travels meeting the rich and famous, sportstars, film stars, and politicians while the final chapter deals with her latest battle against the skin cancer.

Tags: International Marathon Swimming Hall of Fame, Linda McGill, Surviving the Sea of Life: The Triumphs and Tragedies of an Australian Olympian