The Link And Dialog Between Dover And Maghreb 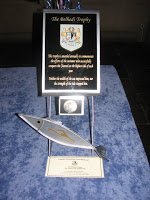 TUNISIA. Lt. Colonel Nejib Belhedi, a Channel Swimming Association representative and promoter for the Dialog Across the Seas, shared the story of the Belhedi Trophy and its relationship to the Maghreb countries of Morocco, Algeria, Tunisia, Libya, Mauritania and the Western Sahara.

“In my preparation for his Channel attempt, the Tunisian Ministry of Defence provided its support by allowing me to train and attempt different marathon swims in the Mediterranean Sea.”

“I trained in such places as the Kerkennah Islands to Sfax, Hammam lif – Sidi to Bou Said, Cap Bon to La Marsa and the Sicilian Channel – La Galite Island to Cap Serrat. As a result, I completed my England – France crossing in 1993 in 16 and 35 minutes under difficult conditions.”

“The encouragement by the Tunisian government led to my encouragement of marathon swimming among young people in Tunisia today. I dream of another Tunisian swimmer achieving the Channel swim. Success will bring more success and I hope the presence of other international swimmers will encourage the development of more Tunisian marathon swimmers.”

“In 2007, I received the Montserrat Tresserras Trophy for the first successful swimmer from a new country and discussions ensued. In 2008, the Channel Swimming Association established a new trophy in my name, The Belhedi Trophy for the Channel swim successfully performed on the highest tide of the season.”

The Belhedi Trophy carries the names of two American swimmers, Kelvin Webster and Anthony Zamora, who were awarded the trophy in for their Channel swims on the highest tides in 2008 and 2009 respectively.

“I want to establish a nursery for the first generation of North African marathon swimmers and organized the Tethys Challenge in 2007 in Tunisia where seven Channel swimmers from England, Scotland, India and Norway swam seven different crossings in seven days between the islands of Zembretta, Curiates, Kerkennah, Djerba, Plane, Cani and Echkli. The conception led to The Formula 7777 Challenge. At the suggestion of the Channel Swimming Association, this ultimately led to The Belhedi Trophy and the birth of the Dialog Across the Seas project with the support of International Swimming Hall of Fame inductee Michael Read.”

Since the start of this project, new opportunities and other regions of Magreb have expressed their interest and support of marathon swimming. Selection of swimmers, preparation, training, cold water acclimatization, specific medical support and the qualification of pilot boats to escort swimmers are all issues that are being formulated.

“This is the relationship between The Belhedi Trophy and the Dialog Across the Seas project, the marathon swimming link between Great Britain with the Maghreb countries.”