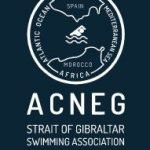 The first records date to 1927, when the English swimmers Mercedes Gleitze and Miss Hudson, tried the crossing from Tangier to Gibraltar. Obviously they didn’t achieve their goal, the route they selected was not the most appropriate. A year later, Mercedes Gleitze tried again from Tarifa (Spain), reaching the coast of Morocco in 12 hours 50 minutes.

Thus, in the beginning the crossings were made by a few daring swimmers, helped by local fishermen themselves and the navy. In the 80s, a group of locals lead by our honorary president Rafael Gutiérrez Mesa, began to collaborate with the Red Cross to accompany swimmers, who like Mercedes and Miss Hudson, tried to cross the Strait of Gibraltar

Swimmers interest in cross the straights was increasing, and the group of locals reflected on the importance that the swim was acquiring and concluded that an organization was needed similar to other associations such as the Channel Association (CSA)

In 1999 the ACNEG (Strait of Gibraltar Swimming Association) was founded.  Starting with 2 or 3 crossings a year compared to the hundreds of applications that it currently receives. The 19 years that we have been running the crossings without incident, speaks to the safety of the journeys that we organize.

Swimmers from all over the world aim to swim across the Straits of Gibraltar, and these objectives not only include individual challenges, but internationally recognized challenges such as the Oceans Sevens, which includes the Strait of Gibraltar among the most important open water swims in the seven continents.

To be clear, The Straits of Gibraltar is one of the most important swims of the seven continents.

ACNEG recognized in 2017 by the International Marathon Swimming Hall of Fame (ISHOF), World Open Water Swimming Association (WoWSA) nominating its president as man of the year, and other entities make it worthy of the uniqueness of granting certificates that validate the crossing according to the sports regulation of open water swimming.

Since 1999, our mission has been to promote, organize, control and carry out open water swimming crosses in order to unify criteria and ensure the smooth running of the event in close collaboration with the maritime authorities.