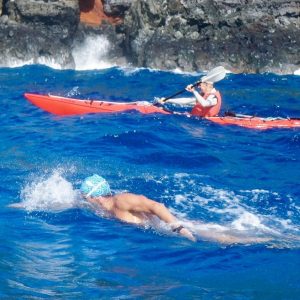 Courtesy of The Pitcairn Miscellany, Pitcairn Island. In the May 5th 2019 issue of The Pitcairn Miscellany, editor Simon Young and reporter Sue O’Keefe gave a report of the unprecedented 9.8 km circumnavigation swim in 2 hours 27 minutes by Alex Kostich of their island nation Pitcairn Island: Living on Pitcairn, despite its isolation, or in part because of it, we do have the opportunity and privilege to meet many adventurers and diverse characters. This takes many forms such as an aged person making it to our hostile shores, rock climbers from National Geographic, Historians, Linguists, Naturalists, Eclipse Chasers, and Dark Sky enthusiasts to name a few. This month we were treated to meeting Alex Kostich, and Steve Childers. Both experienced competition open water specialists, hailing from the USA. Alex, who has been competing for 30 years, felt the timing was right to not only fulfil a lifetime wish to visit Pitcairn, but also to focus his mind upon recovering from an injury. Having recently undergone shoulder surgery, Alex decided that to motivate himself to work on his physical therapy to recover from this injury, he would commit himself to the challenge of being the first person to swim entirely around Pitcairn Island. With the support of locals who travelled nearby in boats, and despite rough weather Alex achieved his goal with a remarkable time of 2 hours 37 minutes and 45 seconds. Alex commented that the ocean in places was the roughest he has ever swam in, with swells rebounding off rocks made it confusing to predict, but exciting. Alex also wished to state how grateful he is for local support. It is always such a privilege to meet someone so motivated and focussed. Copyright @ 2019 by Pitcairn Miscellany