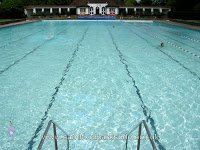 Pools play a large role in the training of most open water swimmers and triathletes.

Up and down the black lines of chlorinated facilities around the world, the warm, calm waters of pools are as familiar to triathletes heading to Kona for the Ironman as they are to swimmers headed to Dover for the English Channel.

It is rare to see open water swimmers – like Stephen Redmond – who train exclusively in the rough, cold venues.

So the relationship between open water swimmers and pools is a natural one. This year, both 2011 Open Water Swimmer of the Year Oliver Wilkinson and International Marathon Swimming Hall of Fame Honour Swimmer Tom Hetzel will make their imprint on the pool world.

Wilkinson is taking his endurance talents from the open water to his local lido on July 15th at the Sandford Parks Lido. The Manhattan Island single-circumnavigation world record holder will swim 42.2 km in a charity swim. The Sandford Parks Lido was built in 1935 and had slowly fallen into disrepair. In 1996, a charitable trust was set up to manage the lido and not only did it survive but over £370,000 was raised along with government grants to refurbish the pool and fix many of the longstanding problems.

“I think there is still a perception that the lido is cold and uninviting, only for cooling off on a scorching hot summer’s day,” said Wilkinson. “I’m hoping to raise people’s awareness about how lucky they are to have a pool like the Sandford Parks Lido on their doorstep, if it isn’t used it will one day be gone and that would be a tragedy. Hopefully my swim will raise some money to continue to fund the Lido and encourage others to make the most of this amazing place. If I can swim 844 laps in one go maybe a few people will think they can come down and swim a couple.”

While Wilkinson is doing his best to preserve a lido, the legacy of Tom Hetzel will be remembered at the 2012 Valero Swim Meet in Corpus Christi, Texas. Bill Barton, one of the many people touched by the 8-time English Channel swimmer said, “I dealt with [his passing] when it happened, but now I feel more jubilant [that] I get to celebrate him and that’s how I like it.”