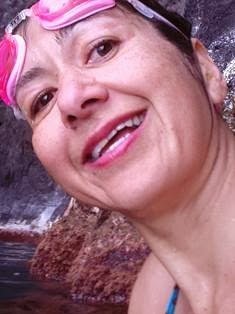 46-year-old Lois Lutz learned how to swim at a young age when she lived in the Carribean and was surrounded by water. But she didn’t officially learn to swim properly until she started doing triathlons in 2000.

The resident of Hawaii has been swimming all over the Garden Isle. “Each spot has its own wonderful nuance. If I had to pick a favorite [place to swim], it would be swimming Ke’e Beach to Hanakapi’ai simply for its beauty and dangerousness. But it is extremely open water with no lifeguards around without much of an exit if you get into trouble. You only do it when conditions are favorable. We took a visitor once, who was an open water swimmer, and he literally crawled onto the beach and hugged us because he was so relieved to be on land.”

While in the water off the shores of Kauai, Lutz has seen turtles, rays, eels, urchins, many different kinds of fish, and even a blacktip shark.

“Swimming in Poipu is amazing – the water is crystal clear and there’s so much sea life to stare at. Anini is great. It’s completely protected by reef so you can swim there year-round which we do. Treading water in the middle of Hanalei Bay and staring at the bay, the mountains and the waterfalls is nothing less than awesome in every sense of the word.”

She has participated in the Hanalei Bay Swim Challenge, one of the America’s Top 100 Open Water Swims. “