A Long Half Mile In The Cayman Islands 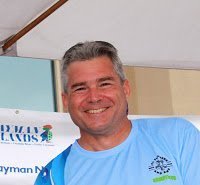 Last weekend, 53 swimmers faced wind and rain for the annual sea swim on Cayman Brac, the second-largest of the three Cayman Islands with a resident population of 1200.

The return of this swim to Cayman Brac is a hallmark of progress since the island was devastated by 2008’s Hurricane Paloma. The swim was held in 2009 although there were no hotels open and the airport was largely reserved for relief flights to help rebuild.

The course boasts a strong current which makes the effort a downhill swim.