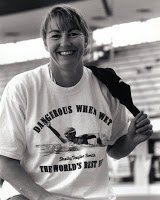 Chris Guesdon, a board member of the International Marathon Swimming Hall of Fame brought this remarkable event from the history of marathon swimming: the Mediterranean International Swimming Relay Race, a 93 km Malta-to-Sicily competition.

Chris recalls, “The race was held from Malta to Sicily on the July 19th and 20th 1996 with a 3 pm start time from St. Julians Bay in Malta. The Australian team finished first in Marina di Modica in Sicily, Italy 19 hours and 11 minutes later.”

Five nations participated: Australia, Hungary, Italy, Czech Republic and Slovenia where each country was represented by four athletes and supported by a yacht and a dinghy.

The winning Australian team consisted of Melissa Cunningham, Shelley Taylor-Smith, Joe Mitchell and Grant Robinson. They swam 20-minute legs and beat the all-male team of Italy. “They swam 4 x 20 minutes recurring, which was an innovative plan for such a distance as their plan was to competitively race the [entire] distance,” said Chris. “To achieve this strategy and defeat Italy, they needed a support staff of six who would rotate duties through the race. This was no mean feat for the staff, partly due to the rate of change-overs, particularly through the night hours.”