Looking Back At Time – Triple Crown Doubled By Tina Neill 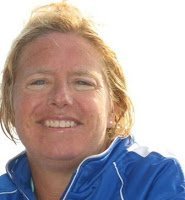 Until this year, the Triple Crown of Open Water Swimming has been accomplished twice by only one individual: Antonio Argüelles.

The Mexican business innovator and executive stood alone in the Triple Crown world until Tina Neill stepped upon the top podium with her Mexican colleague.

But once was not enough. She continued to make her mark on the channel swimming community. She crossed the English Channel again in 2005 in 13 hours 22 minutes, 2 hours slower than her first swim. But she did her second swim all backstroke. Her second, third and fourth go-round in the Catalina Channel was a mammoth 22 hour 2 minute double-crossing in 2008, followed by a single-crossing 16 days later in 10 hour 37 minute (all backstroke). She completed her second Triple Crown earlier this year with an 8 hour 37 minute circumnavigation of Manhattan Island (where she was sighted swimming on her back). Between these exploits, she also swam across the Kaulakahi Channel (in 17:17 in 2012), the San Clemente Channel (in 28:41 in 2012), the Santa Cruz Channel (in 10:32 in 2011), and the Lake Zurich Marathon Swim (in 8:02 in 2006).

With 8 legs completed on the Triple Crown (2 in the English Channel + 4 in Catalina + 2 around Manhattan) and many of those miles swum on her back, Neill stands uniquely among her Triple Crown colleagues.

Neill was nominated for the 2012 World Open Water Swimming Woman of the Year award. Her World Open Water Swimming Association award reads, “Look at Tina Neill and nothing hints at records. Talk to Tina Neill and nothing she says hints of greatness. But the introverted, humble explorer of the raw potential of the human spirit has been making waves in the open water throughout her career. In her own quiet way, Neill loudly proved once again how uniquely special she is. She hit the lumpy water at night, battled the elements far from shore, and finished the next night, completing an unprecedented 28 hour 41 minute crossing of the 52-mile (83.6 km) San Clemente Channel. Like her record-setting backstroke swims in the England and Catalina Channels, she efficiently funneled her talents and enthralled her crew with her strength, stamina and speed. For her quiet nature despite swims that scream volumes, for always remaining under the radar despite record-setting exploits, for the pure genius of her aquatic talents, Tina Neill is a worthy nominee for the 2012 WOWSA Open Water Swimming Woman of the Year.”