Looking Forward To Olympic Open Water Swimming In 2028 And Beyond

Steven Munatones 11/03/2019 NBC, open water swimming, Seine River No Comment
Courtesy of WOWSA, Huntington Beach, California. When the International Olympic Committee approved the 10 km marathon swim in 2005 for its inaugural 10 km marathon swim at the 2008 Beijing Olympic Games, the IOC and FINA put its stamp on the expected formula for all future 10 km marathon swims: * A rectangular course would be placed in a rowing basin. * Athletes would swim counterclockwise around the perimeter of the rowing basin course. * Turn buoys would be placed at the corners of the rectangular course with guide buoys interspersed along the course. * Swimmers must round each of the turn buoys with their left shoulder. * 10 km course would include four loops of 2.5 km each. * Feeding stations on floating pontoons would be provided. * Coaches could hand hydration, gel packs, etc. to their swimmers from the feeding stations via regulated feeding sticks. * Race officials would be position near the turn buoys and in official’s boats following the swimmers. * A finish chute would direct swimmers to a finish timing pad. * The finish would be at least 2 meters of vertical timing pads placed above the water’s surface. * High-speed cameras positioned in different locations would record the finish of the swimmers. At the 2008 Beijing Olympics, stars of the sport – Maarten van der Weijden, David Davies, Thomas Lurz, Larisa Ilchenko, Keri-Anne Payne, Cassandra Patton and Natalie du Toit suddenly became known worldwide with the Olympic exposure. But it did not take long for the standard 4-loop rectangular course to be modified. By the 2012 London Olympics, the 4-loop rectangular course became a 6-loop geometric course in order to be placed with the Serpentine near Buckingham Palace. At the 2016 Rio Olympics, the course returned to a 4-loop course, but the rectangle became another geometric course to fit the situation in Copacabana Beach in Rio de Janeiro. But the 2020 Tokyo Olympics in Odaiba Marine Park in Tokyo Bay will see a return to the original standard of 4 loops of 2.5 km in a flat-water, very warm-water (and polluted) course. But what of the 2024 Paris Olympic Games in the Seine River [that will start near the Eiffel Tower] or at the 2028 Los Angeles Olympic Games? 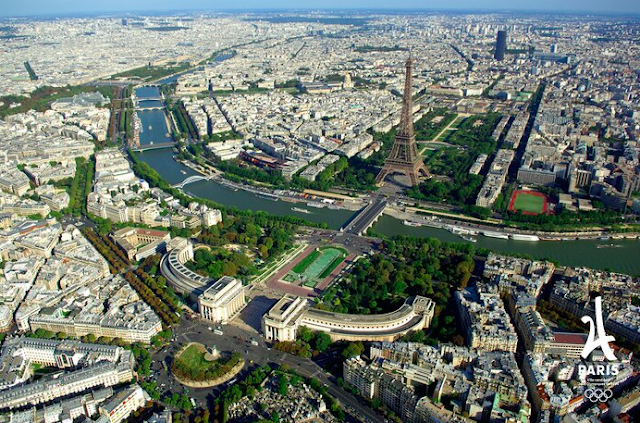 What will be the fan experience? How will sports fans and open water swimming spectators – on location and online – experience the 10 km marathon swim? How will the swimmers be featured and filmed? What technologies will be utilized to bring the drama and excitement of the races to the global audience? The pace of technological progress and consumer utilization of those future technologies are impossible to accurately predict. But here are a few of our futuristic guesses: 1. Coverage of the swimmers will be from the surface of the water from the NBC media boats – but also both from underwater and aerial perspectives, and from the feeding pontoons and lifeguard paddlers. These multiple angles will be augmented by closer and more exact audio coverage that will enable viewers to more fully view and experience the actual live action of the swimmers. The new type of the Seiko Block Cam [shown above] is one precursor of the new camera angles that are coming to Olympic sports. 2. Wrist or ankle transponders of the contemporary era will become smart chips that can be placed on swimmers’ goggles or swim caps – and will capture and relay biometric data like pulse rate (i.e., heart beats per minute) and respiratory rate (i.e., breaths per minute) and strokes per minute (spm) in addition to finish times and GPS locations to global audiences in near real-time. 3. The finish pontoons currently used by Omega Timing will become smart finish pads. Instead of depending on human decision-making of FINA officials based on the use of wrist transponders and high-speed cameras, the finish pontoons will be able to identify fingerprints and the impression left by the friction ridges of the swimmers’ palms. Currently, when Swimmer A and Swimmer B finish together, the FINA officials look at camera replays and make decisions based on the photo finish. In the future, technology will be used to more objectively make decisions on placing. 4. From an entertainment perspective, athletes may confidentially pre-record their strategies and tactics that they intend to use in the actual 10 km marathon swim. During the actual broadcast, these pre-recorded voices can be interspersed at specific points in the race. So, if American Haley Anderson intends to pick up the pace at the 7.5 km mark – and she does make a surge at the 7.5 km mark, the broadcasters can air those pre-recorded comments during the broadcast. And if French fans what to learn what the French swimmers are thinking or intend to do during the actual race, these pre-recorded voices can be recalled from the archives. So instead of waiting until after the competition is over to learn what the athletes did or what they were thinking, spectators can learn what the athletes are thinking DURING the actual race. 5. Microphones will be placed on the coaches of the athletes and their voices can be concurrently heard by fans. There will undoubtedly be pushback from the coaches for being recorded by the media, but the entertainment value to the fans will be overwhelming – especially when coordinated with the pre-recorded voices of the athletes themselves. 6. Rubber and silicone swim caps will be GPS-honing devices. Now, especially in a pack or in wide panoramic television shots, it is nearly impossible to tell which swimmer is from which country or who any particular swimmer is. This is especially true to the casual Olympic fan or someone who is not intimately familiar with the swimming style and stroke of the individual swimmers. But the Smart GPS Swim Caps will not only identify the swimmer in a pack, giving them the exact distance swum and time, but also be identifiable to television and online audiences. So if the German fans what to know where and who the German swimmers are, the Smart GPS Swim Caps will be identifiable to these fans through technology of 2028. Copyright © 2008 – 2019 by World Open Water Swimming Association