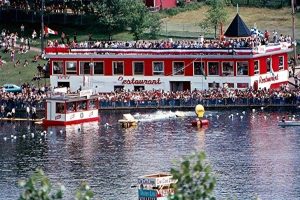 The event was the brainchild of Mayor Gaston Fortin of Ville La Tuque. The race saw upwards to 20 two-person teams against each other and the clock. The ran started at 3 pm on Saturday and ended at 3 pm on Sunday. 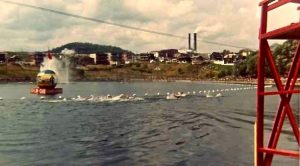 The race was staged in an egg-shaped Lac Louis (Lake Louie) in Québec. The course was a one-third of a mile plus 11 feet that paralleled the shore so crowds of thousands cheered on the professional marathon swimmers day and night. One athlete would swim while the other rested. The teams had different strategies that suited their strengths. 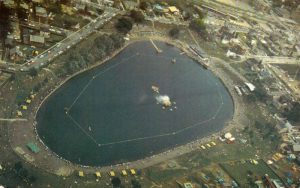 The stories from Lac Louie are numerous and almost too dramatic to believe.

At the 1974 24 Heures La Tuque, John Kinsella teamed up with Sandra Bucha who ended up swimming 100 laps to Kinsella’s 94 to set the record of 194 laps or almost 104 km total. Bucha’s father and trainer Colonel Paul Bucha reported, “[Sandra] feels better now at 2 am than she did six hours ago.”

By 5 am as the morning light was coming up, 14 hours after the start, Bucha explained why she felt good, “You look at the sky and get energy.” She and Kinsella won again in 1975 [see results below].