Lord “Tally Ho” Blears Makes Everyone Feel Like A Hero 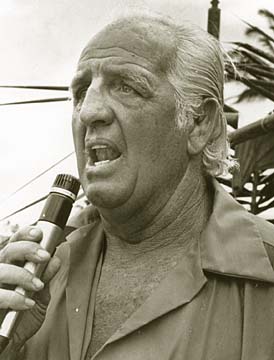 For years, Lord James “Tally Ho” Blears poured his heart and passion into announcing at the annual Waikiki Roughwater Swim on Oahu.

He made everyone cross the finish line feel good about themselves while he made the crowd laugh and learn more about the history of the event.

But few spectators and swimmers knew of Lord Blears’ own long-distance ocean swimming escape and experiences.

During Wold War II, the then 21-year-old was working as a radioman on a Dutch merchant ship Tjisalak that was used to transport supplies across the Indian Ocean. On March 26th 1944, his life nearly came to an end when the ship was sunk by torpedoes shot from a Japanese submarine just before dawn.

The Japanese took Blears and the rest of the survivors on board the submarine. The officers and the only female passenger were taken below deck into the submarine. The remaining men were left on deck with their hands tied. One by one, the Dutch sailors were decapitated. Knowing that his turn would soon come, Blears took action. That day was not about to be his last.

“Two Japanese officers were waiting for us, one with a sword and the other with a sledgehammer. When these guys came at us, I kicked with my foot and pulled my hand out [of the rope] right away and stopped the guy and dived off the submarine.” As he dove into the ocean and kept below the surface of the water, the Japanese shot bullets at him.

“I stayed under as long as I could, and then I came up with my head just out of the water and — tat-tat-tat-tat — machine gun bullets were going all around. When I came up for my next breath, the submarine was quite a way away. There were two officers in old-fashioned deck chairs firing with rifles. I kept diving until I saw that they weren’t firing at us anymore.”

With nowhere to swim but back to the area where the Tjisalak sank, he started to swim. Swim or die; it was an easy decision for Blears, a former competitive swimmer. He swam through the morning and into the afternoon. Stroke after stroke in the seemingly endless Indian Ocean, he miraculously came across a card table and a life raft. He eventually found four other survivors who had similarly escaped from the sunken ship and Japanese captors.

With Sri Lanka more than 500 miles away, their odds of surviving were nearly zero. But the group of five were eventually rescued by the S.S. James Wilder.

For decades, he made his living as a professional wrestler and announcer and was eventually invited to serve as the announcer for the Waikiki Roughwater Swim where he made everyone else feel like a hero.