Loren King, A Renaissance Man In The Open Water

Loren King, A Renaissance Man In The Open Water

As channel swimmers know well, the course to the finish is usually not a straight line.

Something that Professor Loren King has personally experienced. King, with a doctorate from M.I.T. and associate professor of political science at Wilfrid Laurier University, describes himself as “a political philosopher, occasional data analyst, and marathon swimmer. I direct a charitable trust that supports responsible water stewardship, and manage a small private equity fund, primarily in water-related securities and technologies.”

Water stewardship plays a key role in his activities, both in and out of the water.

Mark Mattson, President of Swim Drink Fish said, “Swimming is the key indicator of success in treating pollution from rendering water unfit for humans and wildlife.”

Swim Drink Fish, launched in 2001, is an organization that supports clean water in the Great Lakes so citizens and visitors can enjoy swimming, drinking and fishing in clean water.

In the latter parts of the 20th century, swimmers were discouraged from entering Lake Ontario due to concerns about water quality. But through the efforts of swimmers like Professor King and Madhu Nagaraja, a growing number of people have become strong advocates to return their local open bodies of water to swimmable cleanliness.

Professor King eventually found his way swimming across Lake Ontario in 2016 in support of the Great Lakes Trust, an organization that he co-founded with Nagaraja to fund responsible water stewardship. The Great Lakes Trust is a collective of scientists, artists, and adventurers involved in a range of activities addressing water issues in the Canadian Great Lakes basin. The Trust oversees a charitable endowment providing small grants for creative solutions to the many challenges facing the Great Lakes.

He explains, “The Great Lakes Trust began as a simple idea: open water swimmers finding ways to give back to the waters we love. The idea grew to include all manner of fellow adventures: paddlers, runners, triathletes, sailors, surfers – and then bringing them together with artists and academics, scientists, community leaders, and concerned citizens. Now the Trust is a collective of experts and advocates who help others to think in long term, solving problems so much bigger than any one community or generation, protecting one fifth of the planet’s freshwater.”

Formerly a competitive swimmer who limited his talents to the pool, Professor King gradually increased his distance and degree of difficulty in the open water.

In 2012, he competed in the 8 km English Bay Challenge and the 10 km Eton Swim, both wearing a wetsuit. But then he completed 10 km and longer swims including the LOST Swim, Elma Couture Open Water Swim, and the 13 km Boston Light Swim. Then he set his sights on Lake Ontario where he completed the 52 km Marilyn Bell route in 18 hours 35 minutes. In 2018, he participated in the Memphremagog Winter Swim Festival during February and made an unsuccessful attempt of the English Channel. But a year later, he completed a 33.5 km crossing of the English Channel in 12 hours 2 minutes. He has also completed swims in Mexico (10 km El Cruce), Hawaii (North Shore Challenge) and San Francisco (10 km Bridge to Bridge Swim). 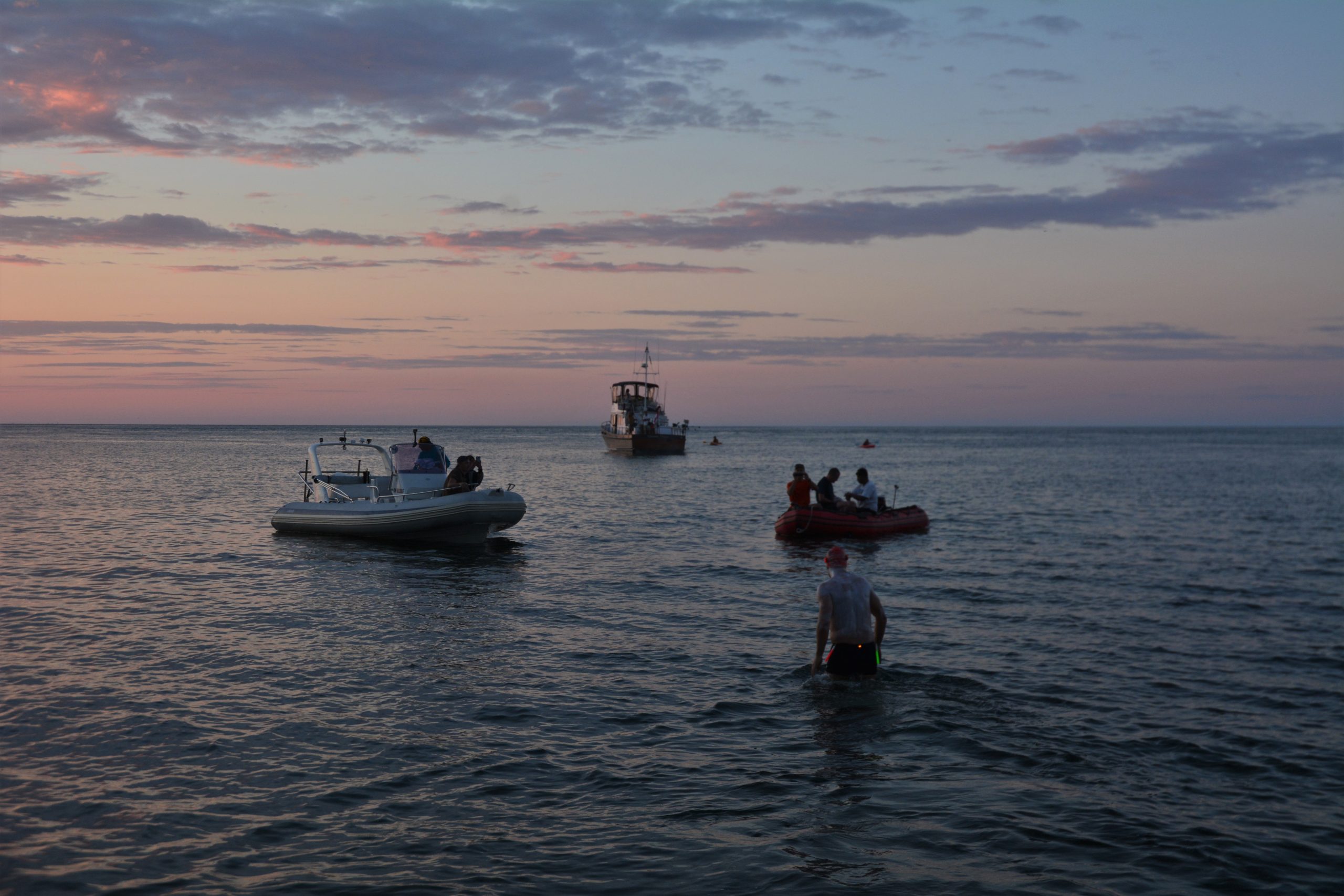 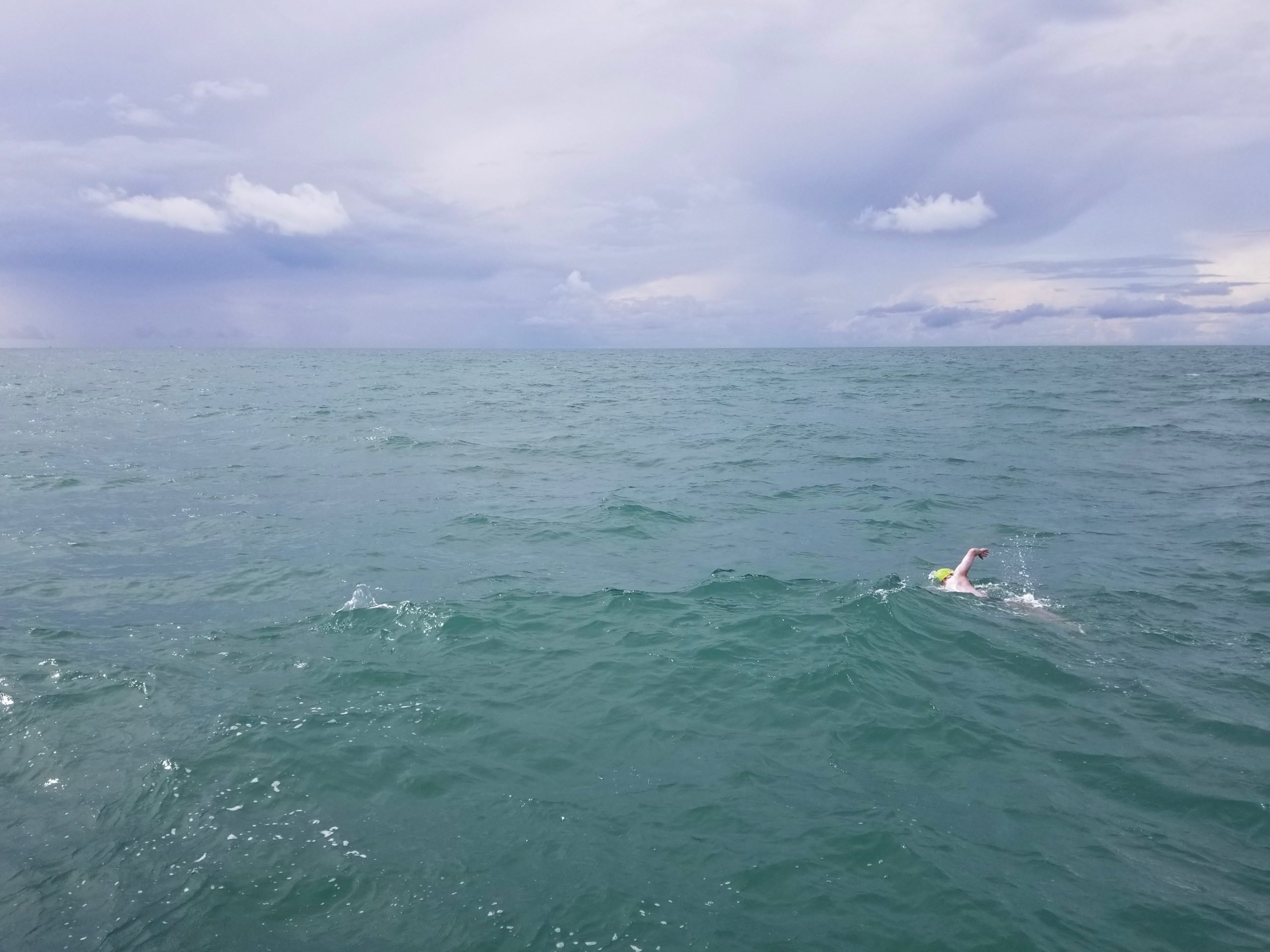