The Love-Hate Relationship With Swimming 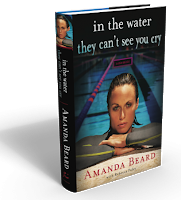 “I think all swimmers have a love-hate relationship with the sport,” says 7-time Olympic medalist Amanda Beard. “But these days I probably only hate it 5% of the time, which is good.”

Beard is gearing up for her fifth consecutive Olympic Games, if she can qualify for the USA Swimming Team at its upcoming Olympic Trials. But her path to Olympic success and financial security through her modeling and business career has not been easy as she explains in her book In The Water They Can’t See You Cry.

Her candid and uplifting memoir describes her occasional tortuous path from the top of a sports and modeling career, through depression and rebirth through her marriage.

But her comment on the love-hate relationship with the sport of swimming can certainly ring a bell for some open water swimmers. While pain is occasionally part of the equation for marathon swimmers, there are days when athletes get frustrated or upset by their coaches, muscle pain, the weather, the water temperature, the waves, seasickness, chafing or the sheer difficulty of navigating in turbulent waters.

It is our observation that the peak of frustration often comes when a swim is 60-80% completed – especially where the finish is apparently nowhere to be seen. While there are always exception, this mental hump somewhere between 60-80% along the way seems to be true in talking to athletes whether they are doing a one-mile mass participation swim or a solo channel swim of marathon distance.

Once past that 80% barrier, especially if the finish (a buoy, a pier or the coastline) can be seen, there seems to be a second wind or an adrenalin boost that enables many athletes to finish strongly – or at least gain the confidence that the end is near.

The thoughts, “What have I put myself into?” or “Never again” or “How am I ever going to get through this?, often (either randomly or increasingly) come to mind in the middle of an ocean swim, a channel attempt or a lake race, especially when the surface turbulence is rough or the water temperature is extreme. Sometimes, the feeling of frustration is geared towards another swimmer, a coach or someone back onshore or on the escort boat.

And many times the negative feelings are immediately – or magically – washed away by a brief respite, a bite of chocolate, a feeding, a glimpse of the next buoy, the smile of a coach, by thoughts of a friend, spouse or child or a prayer.

So it seems that Beard’s comment on her love-hate relationship with competitive pool swimming also has its place in the open water swimming world.


Tags: Amanda Beard, In The Water They Can't See You Cry