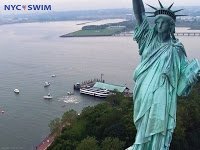 Luane Rowe, a 23-year-old Australian who began working at FINIS last year, combines her industrial design expertise with her passion for open water swimming to do her job.

As a side perk of her responsibilities, she also is able to fit in open water swims throughout the Americas, from the Waikiki Roughwater Swim in Hawaii and the RCP Tiburon Mile in California to the Statue of Liberty Swim in New York and the Flowers Sea Swim in the Cayman Islands.

A multi-time winner in the Waikiki Roughwater Swim, Rowe also won overall in the 2012 Statue of Liberty Swim this past weekend in 14:40 over Bruce Brockshmidt and Thayer Thompson.

For Americans, the statue is an iconic symbol of freedom and democracy with profound meaning for a country populated by immigrants from around the world. The Statue of Liberty Enlightening the World was a gift of friendship from the people of France to the people of the United States. The Statue of Liberty was dedicated in 1886 and is of a robed female figure representing Libertas, the Roman goddess of freedom, who bears a torch and a tabula ansata (a tablet evoking the law) upon which is inscribed the date of the American Declaration of Independence, July 4, 1776.