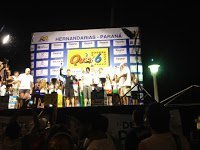 Larisa Ilchenko, the Russian Olympic gold medalist and multiple world champion was renowned for her signature move, The Ilchenko.

The Ilchenko is a tactical move where the swimmer drafts expertly throughout the race and then darts ahead near the end. On paper, The Ilchenko seems easy, but in reality it is a skill that is difficult to execute in the dynamic conditions among elite athletes.

It not only requires patience and concentration, but also precise timing and raw speed at the end of a race.

Luciano Sales Rubio of Argentina pulled The Ilchenko at the end of the 88 km Maratón Hernandarias-Paraná. It was fellow countryman Damian Blaum who was the leader during much of the world’s longest marathon swimming race and ultimately the victim of The Ilchenko.

After Blaum, Mohammad Saleh of Syria finished third on the third stop of the 2013 FINA Open Water Swimming Grand Prix.

The race between Hernandarias and Parana was the third and last in Argentina. The series will now move to the northern part of the American continent, with the next three legs in Mexico and Canada (Cancun, Lac St-Jean and Lac Memphremagog), before concluding with two events in Europe – Ohrid in Macedonia and Capri-Napoli in Italy.