Luminaries In The Aquatic World Gather In The Hall Of Fame 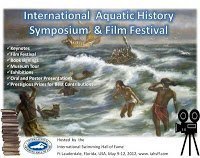 During the International Aquatic History Symposium & Film Festival in Ft Lauderdale, Florida, USA, the following people will present their work in an oral or poster presentation, or will showcase their film, in addition to offering book signings and exhibitions.

The presentors will deliver their innovative, colorful, educational and humorous presentations throughout the International Marathon Swimming Hall of Fame weekend of May 9th – 12th, each touching upon aquatics and the swimming community. They are in alphabetical order:

Stathis Avramidis Ph.D. who conducts research on drowning prevention, rescue and treatment in his capacity as Associate of the Hellenic Centre for Disease Control and Prevention (Greece), Visiting Research Fellow of Leeds Metropolitan (UK) and Task Force Member of the Lifesaving Foundation (Ireland). Dr Avramidis is one of the most prolific water safety authors having authored nine academic and professional books on water safety and over 250 other publications or conference presentations. He was honored by the International Swimming Hall of Fame with the Paragon Aquatic Safety Award 2009.

Eleftheria Avramidou DipEd, BEd, BSc is a graduate of Leeds Metropolitan University in Sport and Exercise Science and Sport Science – Physical Education from Athens University. She works as a personal trainer of VIPs and a swimming and fitness instructor in Grand Resort Lagonissi. She has co-authored two books on lifeguarding and baby swimming and presented several publications in conferences and aquatic magazines. She has been honored several times as professional in numerous countries and has been 25 times national champion in swimming and fin swimming in Greece.

Dave Barney has coached interscholastic sport for more than 50 years. He is an emeritus member of the English faculty at Albuquerque Academy in New Mexico, and has served for more than 40 years as the school’s varsity boys and girls swim coach. His writings on sport in general and aquatics in particular have appeared in numerous publications. He is also a member of the International Swimming Hall of Fame’s Selection Committee.

Robert Barney is professor Emeritus at the University of Western Ontario in London, Canada. Before serving in the United States Air Force during the Korean War, he was a three-sport athlete at the University of New Mexico where he received his Ph.D. He has published 300 sport history articles in his career, most of them on the Modern Olympic Movement, the best known of which are Selling the Five Rings: The IOC and the Rise of commercialism (2002) and Tarnished Rings: The IOC and the Salt Lake City Bid Scandal (2011). A former president of the North American Society for Sport History, he founded the International Centre for Olympic Studies in 1989, was awarded the Olympic Order in 1997 and the Pierre de Coubertin Statue in 2008.

The Honorable Robert Beach worked his way through the University of Tampa and Stetson Law School, and was a lawyer for nine years before becoming a Florida Circuit Court Judge. In 1970, he joined the effort to establish Masters Swimming and was elected the first vice chairman. He received the prestigious Captain Ransom J. Arthur Award in 1986 and earned 22 Masters All American honors and eight All Star Team honors. At the age 81, he continues to participate and promote Masters Swimming.

Dawn Pawson Bean founded Synchro, the first magazine devoted entirely to the sport of synchronized swimming and continued as its editor and publisher for 30 years. A National and Pan American Games champion, she was the head coach for three nationally ranked clubs from 1951-1983 and has coached Masters synchronized swimmers to national and world championships. From 30 years, she was one of the top national and international judges and has served as President and Olympic International Chairman for United States Synchronized Swimming. She was also the competition director for synchro at its inaugural competition at the 1984 Olympic Games.

Lisa Bier is an associate librarian at Southern Connecticut State Univeristy’s Buley Library. She is the librarian liaison for the departments of Anthropology, Sociology, Social Work, Political Science, and Marriage and Family Therapy. In 2011, her book, Fighting the Current: The Rise of American Women’s Swimming, 1870-1926, was published after her first book, American Indian and African American People, Communities, and Interactions: An Annotated Bibliography, in 2004.

Paul Carvalho is a Montreal-based documentarist who has authored many hour-long documentaries from Harlem to London, Las Vegas to Rio, the heart of Africa to Alaska. His films have been broadcast on such stations as Japan’s NHK, France’s ARTE, the Australian Broadcasting Corporation, the Planet Green cable channel, PBS and most major Canadian stations. A Harvard University Nieman Fellow, he directs, writes and produces the first history of Montreal for Canada’s French-language public television channel, Radio-Canada.

Kevin Dawson Ph.D. is an assistant professor of history at University of Nevada, Las Vegas and a 2004-2005 Ford Dissertation Fellow. Dr. Dawson’s research analyzes how members of the African diaspora recreated aspects of their African heritage in the Americas and Europe. Field and archival research have been conducted in West Africa, Barbados, and throughout the United States. He published Enslaved Swimmers and Divers in the Atlantic World in The Journal of American History and is working on a book titled Enslaved Watermen in the Atlantic World, 1444-1888, which considers how slaves transmitted African maritime skills to the Americas and how they shaped the social, cultural and economic development of the Americas.

Tom Griffiths Ed.D. has been an Aquatic Safety Specialist for 40 years, including his position as the Aquatic Director and Safety Officer for Penn State University from 1986 to 2009. Dr. Griffiths has written seven books, created four videos, wrote hundreds of articles, invented numerous products and has been featured in several segments in television and radio, including the Discovery Channel and Inside Edition. He is the founder and president of the Aquatic Safety Research Group and conducts research, creates videos and educates.

Charles Kroll created the Lake Washington Lifeguard Challenge Cup competition and researched the history of Lifeguards and Lifesaving in the United States. With over 15,000 items and a library of over 1,400 volumes, his Antique Aquatic Americana Collection has become the world’s largest private collection of such memorabilia. His work has helped illustrate POOL’ by Kelly Klein 1992, SPLASH: Aquatic Shows A-’ by Robert E. Kerper Jr. 2002 and the SWIM Why we Love the Water by Lynn Sherr. Hhe brought the United States Lifesaving Association to the Pacific Northwest and originated NIKE Swim.

Robert Pruter has a 27-year career as an encyclopedia editor in the social sciences and more than eight years as a university librarian. His writing career has been motivated by his love both for the history of sports and for the history of African-American music as they relate to his hometown of Chicago. His books include the award-winning Chicago Soul and Doowop: The Chicago Scene.

John Spannuth has worked as a lifeguard, camp waterfront director, pool manager, an aquatics director, a collegiate swim coach, and a swimming coach for the Phillips 66 Splash Club in Bartlesville, Oklahoma. He has given presentations for over 50 years on physical education, recreation, and aquatics. As President of the American Swimming Coaches Association, he formed the committee for Swimming for Older Ages which emphasized the benefits of physical fitness and regular swimming. In 1970, he organized and directed the first National Masters Swimming Meet for fewer than 55 men and women. He was instrumental in getting the National AAU to officially accept Masters swimming as a recognized and official national program in 1971. He has been the AAU National Aquatics Administrator and International Executive Director for the Special Olympics and organized the National Aquatics Summit, the National Aquatics Directors Conferences, the National Adapted Aquatics Summit, the 1969 World Swimming Coaches Clinic, the First National YMCA Masters Aquatic Championships, the First National Masters Synchronized Swimming Championship, and Who’s Who in Aquatics.

Richard ‘Sonny’ Tanabe was an All-American at Indiana University and member of the 1956 U.S. Olympic Swimming Team. He is one of Hawaii’s greatest swimmers and a legendary free diver and spear fisherman. His books include Spear Fishing on the Island of Hawai’i: A Pictorial History and The Evolution of Freediving & History of Spearfishing in Hawaii. He is founder and President of the Hawaii Swimming Hall of Fame and President of the Hawaii Chapter of the U.S. Olympians.

Bruce Wigo, J.D. is the President and CEO of the International Swimming Hall of Fame since 2005. As the steward of the Hall of Fame’s memorabilia collection and editor of its annual yearbook, he is one of the world’s leading experts in world swimming history. Much of his research has been published in the book The Golden Age of Swimming: A Picture History of the Sport & Pools That Changed America, and in a presentation about Native American Swimming Skills Before and After The Arrival of the Europeans.

Ted Woods is a filmmaker and documentarian where he did research throughout Africa, Latin America, Cuba, and the Caribbean. He documented Cuban Hip-Hop and presented his research to the American Anthropology Association. He them moved to Los Angeles to begin work in the film Industry and studied film at UCLA.