Lynn Kubasek Swims With Wildlife And A Smile 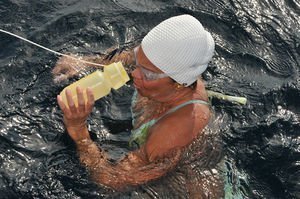 Personable, impossibly positive and ever-energetic Lynn Kubasek added another feather to her swim cap with her latest solo swim in the Santa Barbara Channel with a 7:08 crossing from Anacapa Island.

Fog and an ocean calm were offset by jellyfish and salps the warm 66°-68° waters.

Besides the numerous stings that Lynn endured while being escorted by Captain Bob Andrieux, she was treated to an aquarium full of marine wildlife witnessing her swim.

Whales, dolphins and seals swam near or under her and birds galore flew overhead. The 2-foot swells pushed her towards the California coast in the latter part of her swim where she held a consistent stroke count.

According to the Santa Barbara Channel Channel Swimming Association, Lynn is now the 23rd person to successfully swim from Anacapa Island. The channel was first conquered in 1978 by Cindy Cleveland. Nick Caine has the fastest male time in 5:03 while Cara Silvas holds the female record in 5:31.