Lynn Kubasek’s Snowmen Do Not Melt In Cold Water 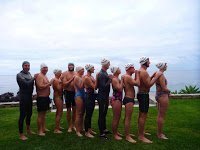 The famed soap-making Channel Observer with a ubiquitous smile, provided these snowman swim caps to her swim buddies.

“I feel so incredibly lucky to have gotten to swim with such a fiercely strong group of women. I met Melissa King. She was the same here, steadfast and upbeat. I so admire her strength and steadfast cheerfulness,” recalled Lynn. “Alas, my preparations against motion sickness (ginger and Dramamine lite) were for naught. I got sick very early in and barely kept a drop or morsel down the entire voyage. It was an interesting day – and I cannot say enough about each and every team member. Among my favorite memories of the swim was on my first round swimming, I thought that I missed the kelp (and grass and rocks) from Laguna Beach because it acts as a marker to let you know you are making forward progress. About 5 minutes later, Vito shouted “Kelp!” and I swam past and over part of a kelp pattie I felt at home. The thought of the commonality of the water made me feel completely at ease. Then I saw a couple of huge ominous purple bell jellies, but it was OK. Vito also said they saw the island during my 1st round (the 6th hour) as the sun started to come out which was so cool.”