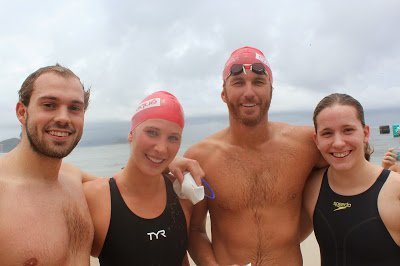 We do not believe Lynne Cox.

That statement in itself is sacrilegious.

Statements by one of the greatest swimmers – and certainly the most eloquent aquatic adventurers – of this generation and arguably of any generation – are taken at face value.

That is, what she says and writes is 100% true and inspirational. Cox has so much to teach the world about the open water. She has rightly earned the trust and respect of everyone in the open water swimming world – as well as the media and general public.

But the media – and Cox – continue to confuse the waters of Guanabara Bay and Copacabana Beach. And their assumptions and statements fly in the face of reality.

The Olympic 10K Marathon Swim will be held in Copacabana Beach – not the far-away Guanabara Bay that is a polluted cesspool. It is clear that the geography and coastline of Rio de Janeiro are not well-known by those who have never visited there.

ESPN’s Bonnie Ford is a reporter who has opined and written for several years about athlete’s safety. Ford took the time to go down to Rio de Janeiro and closely examine and report on the actual situation in Copacabana Beach [read here]. She interviewed swimmers who have swum there including several Olympic 10K Marathon Swim finalists. She witnessed thousands of swimmers – both local and foreign – swimming enjoyably in the ocean water of Copacabana Beach.

During her time in Rio de Janeiro, Ford did see or meet with any swimmer – including visiting foreign elite swimmers – complain about the water quality, illnesses or infections.

The illnesses, infections, and death that scientists, the New York Times, and Cox talk about and predicted simply do not exist.

Cox writes, “Marathon swimmers and triathletes will ingest this water — and the consequences could be deadly.”

(1) identified virus levels 1.7 million times what would be considered hazardous at a California beach
(2) stated that it is very likely that a person swimming in these waters will get infected
(3) predicted that athletes who ingest just three teaspoons of water from the bay have a 99% chance of infection

But these statements and conclusions fly in the face of reality. Not only have many open water swimmers competed in races in Copacabana Beach, but we have also personally swum in the waters of Copacabana Beach several times over the past six years.

Despite virus levels 1.7 million times as high as California beaches (where we swim) and a 99% chance of infection, we have never once gotten sick or even had any kind of minor skin irritation. If these virologists and Cox are correct in their assumptions and assertions, then the Olympians, thousands of (foreign) visitors to Copacabana Beach, and myself should have gotten sick or at least had some minor reaction.

So something is wrong or at least the data is inconsistent with reality.

Cox writes that the pre-race Olympic gold medal favorite Jordan Wilimovsky told her “that he trusted that USA Swimming won’t put us in a situation where swimming could cause us to get sick.”

But if as Cox writes, swimming in Copacabana Beach can be deadly, then has USA Swimming and the U.S. Olympic Committee sent its representatives to swim in and study the waters of Copacabana Beach? If not, why not? If so, what have they found? If they found the water of Copacabana Beach potentially deadly or at the very best highly infectious, why are they bringing this to the attention of the IOC and coaches?

We know that if our own children were asked to swim in waters that could kill them or at the very least have a 99% of infection, then we would not only visit that location, but we would also want to learn how best to alleviate the situation whether it is through a series of pre-race inoculations or legal medicinals to ingest before and after the race.

But if swimmers do not get sick 364 days of the year in Copacabana Beach, why would they get infected on the day of the Olympic 10K Marathon Swim?