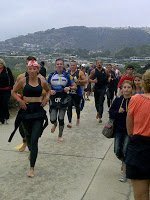 The first Inaugural Orangeman Triathlon was held at Salt Creek Beach in Dana Point, California this morning. It consisted of the choice of a half-ironman (1.2 mile swim, 56 mile bike, 13.1 mile run), an aquathon (bike/swim), or open water swim. Over 800 athletes competed in the events.
The heats were set off by the inspiring, American long-distance open-water swimmer and writer, Lynne Cox who also played an active role in the swim-course safety.

“It was a great honor to be invited to be the starter for the inaugural Orangeman Triathlon. Sandra Field, along time friend, and triathlete who was in charge of safety for the swim, coordinated with Clegg and David the meet Directors, and the Newport Beach Lifeguards, and USCG auxiliary. They put on a fantastic event and it was so fun much seeing friends competing in the triathlon!”