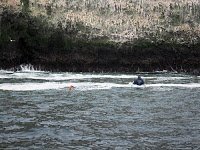 Luminaries, veterans, administrators, observers and newcomers to the channel community will gather in Southern California tomorrow to celebrate and honor channel swimmers and relays who succeeded in California channel swims this season.

The Catalina Channel Swimming Federation and the Santa Barbara Channel Swimming Association awards banquets will be held tomorrow in San Pedro, California, conveniently located next to one another so interested enthusiasts can participate in both events.

The Catalina Channel Swimming Federation brunch, banquet, and social is a sold-out affair held at San Pedro DoubleTree Hotel. After the banquet, there will be a social ocean dip at Cabrillo Beach and a visit to the beach by the Terranea Resort where most Catalina-to-mainland crossings finish.

Lynne Cox will be the guest speaker at the Catalina Channel Swimming Federation banquet where she will share her words of wisdom, experience and perspective to the current generation of channel swimmers. Her talk is an extension of her nationwide book tour (of “South with The Sun: Roald Amundsen, His Polar Explorations and the Quest for Discovery”) to her fellow channel swimmers.