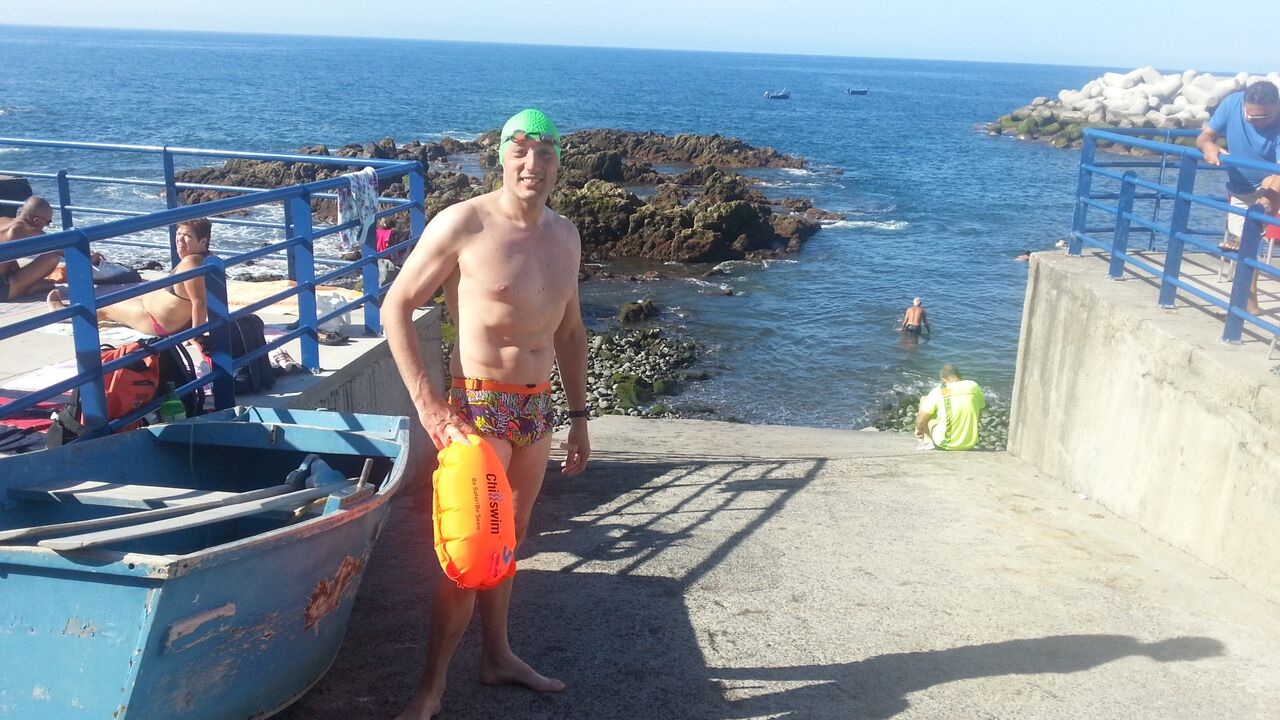 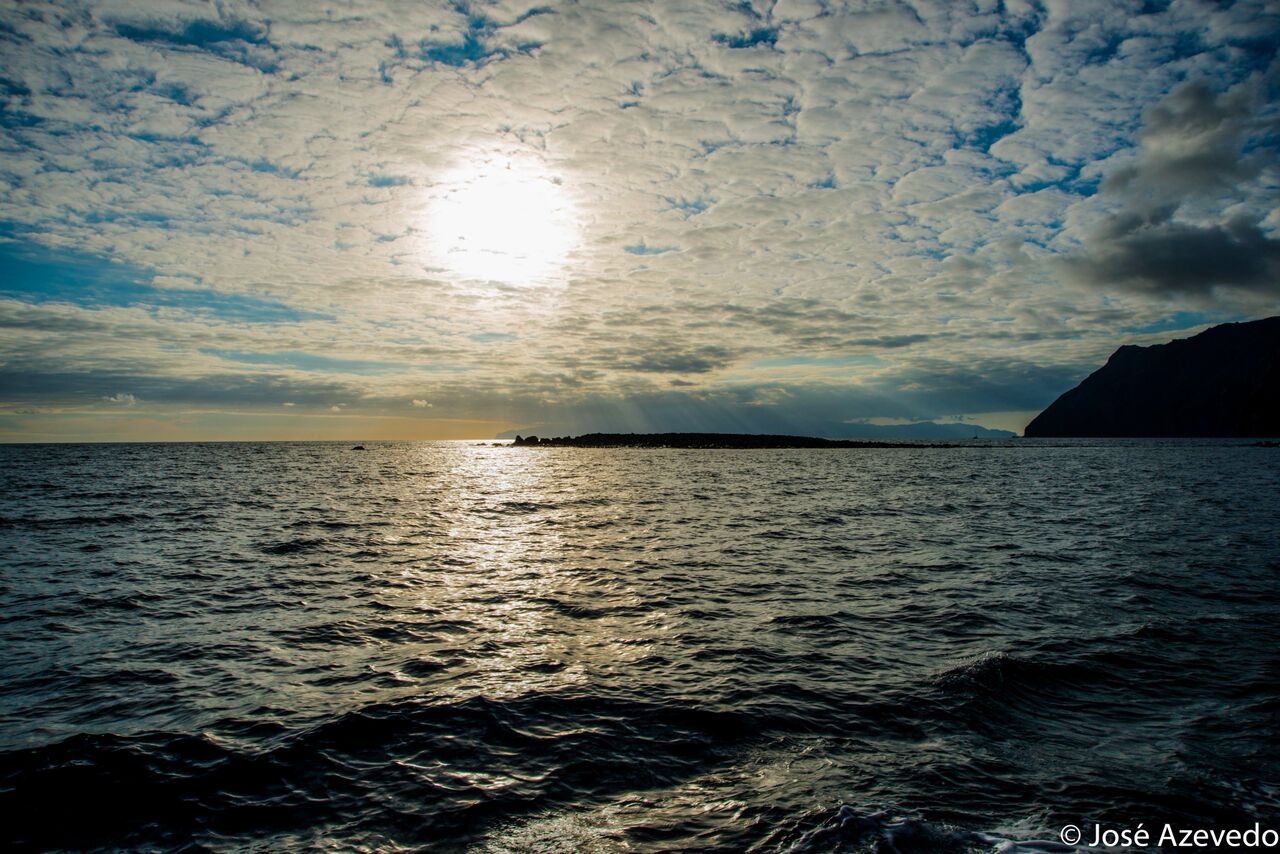 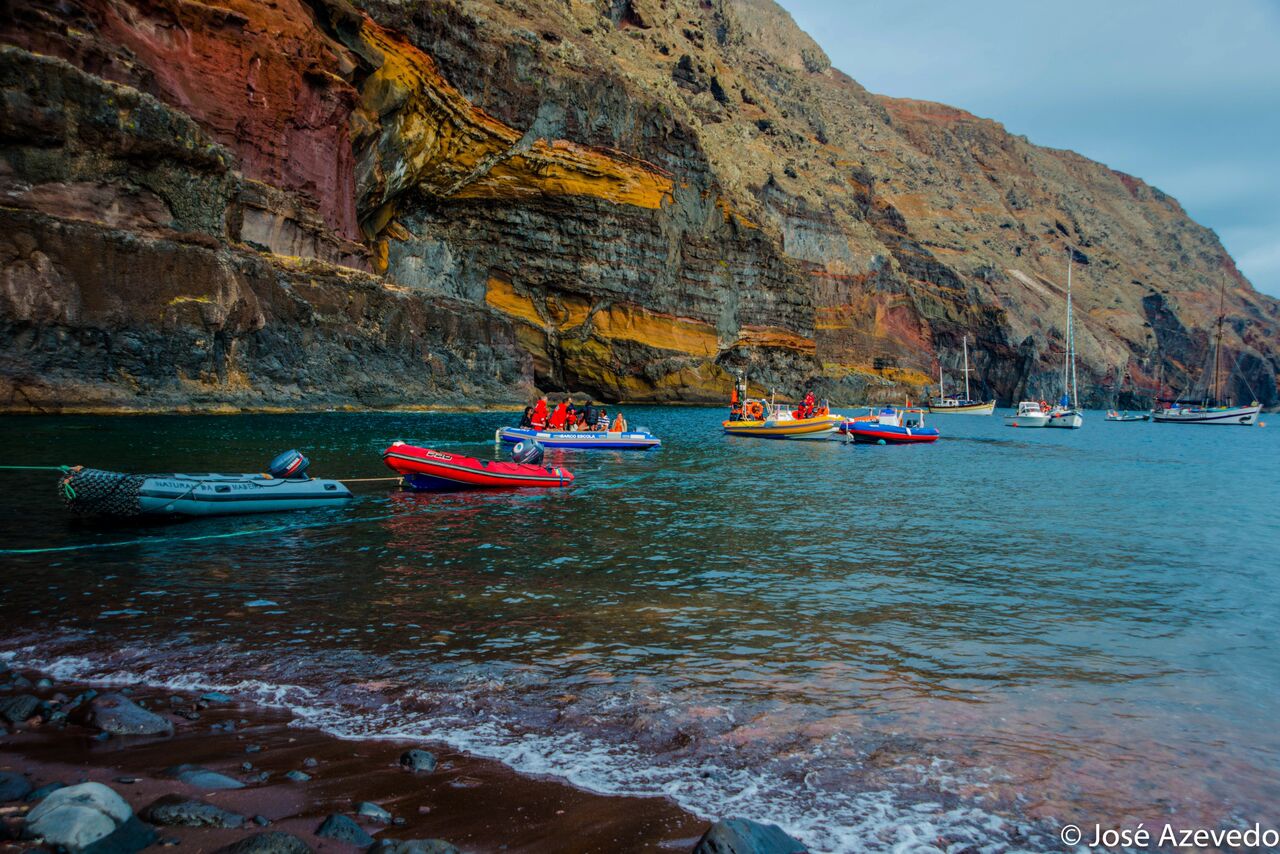 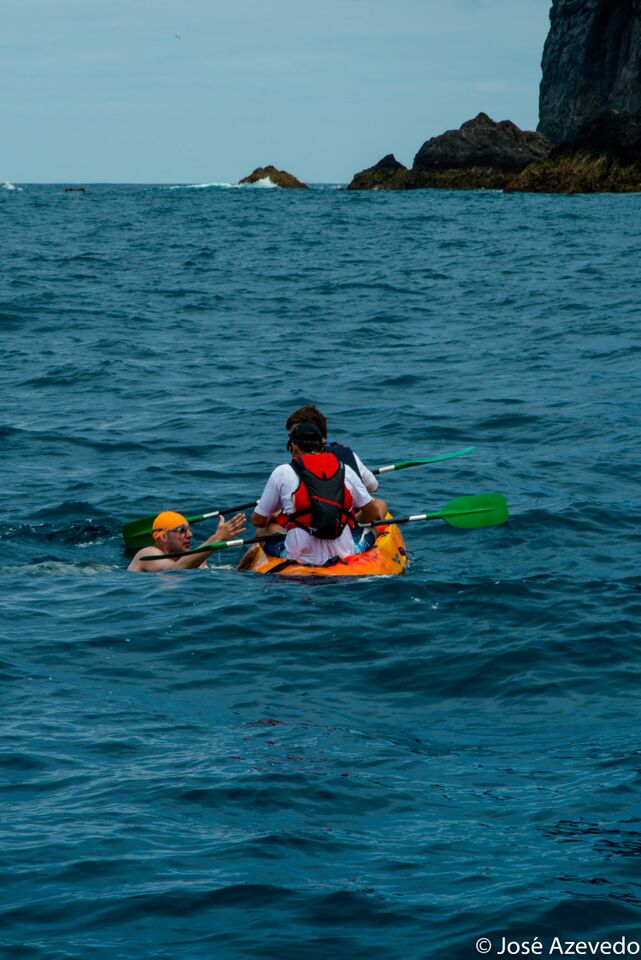 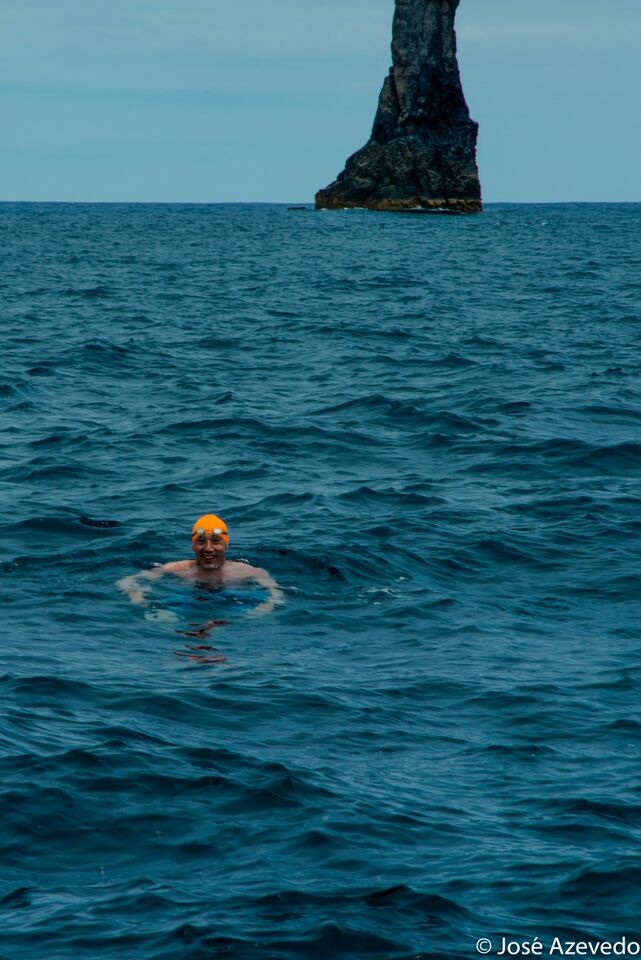 Report courtesy of Colin Hill and photos courtesy of José Azevedo at the 25 km Santa Cruz – Desertas Natural Swim in the Madeiras Islands.

In January I was fortunate enough to take part in a masters 4 km open water swimming event in Madeira, with a water temperature of 16°C.

Whilst chatting to local man Pedro Vasconcelos, who runs a Scuba diving company and provides support boats for swimmers, told me, “See that island over on the horizon, that is Desertas Natural and it’s 25 kilometers from Santa Cruz, would you like to enter our new swim this year to swim to the Island?”

The ‘window’ for the event was the first week in June. This gave the organisers the potential for best day to host the swim during an optimum period. The best weather was going to be at the end of the week, so I happily spent my days training in the sea in the morning and in a fantastic 50m pool in the evenings.

Madeira has some wonderful locations for sea swimming, as local swimmers such as Davide Góis were more than happy to show me. Mário Bonança, Portugal’s 5 km open water champion, put me through my paces training in the pool.

As the start to the UK ‘summer’ had been very cold, having a week’s open water swimming ahead of the event was most welcome and I felt less apprehensive about the swim.

During the event, each participant had a two person sit on top kayak as support, in addition to a large number of motorised boats patrolling around the swimmers.

The day before the race we were informed that one swimmer who couldn’t stay for the revised race day (3 days later than expected due to weather conditions), had attempted the swim but didn’t make it past the currents 5 km from the island finishing point. This wasn’t the pre swim news that we wanted to hear, though it did give the support crew useful information on picking our line to the Island.

A total of 14 started. There were two categories: individual (solo) swim, or team relay (12.5 km each). In addition, I was one of three swimmers who would not be wearing a wetsuit; the water temperature was between 16 and 19°C, which was colder than normal for this time of year but very pleasant for a UK swimmer.

On race day we left the harbour at 08:00. My race tactic for 25 km would normally be a steady first 10 km and try to build through the second half. However, on this day the water conditions were perfect and I knew the wind would rise later in the day, so I changed my plan on the morning and went off pretty hard to try and get as far as possible in the good conditions and hopefully get across the currents before they picked up as well.

One hour into the race my support kayak starting blowing their whistle fiercely at me; this meant that I had to stop. I looked up at the kayakers, a little upset at breaking my stroke. “Out the water!” he yelled at me.

Sure enough, there was a shark fin in the water heading our way. I clambered onto the sit on top pretty quickly. I looked around could see that all other swimmers were also climbing onto their support boats. “What kind of shark?” I asked.

Sharks are pretty rare in this area and I was told that they wouldn’t be an issue during our swim. I watch the fin pass our boat. The event management were soon on the case, and within 5 minutes a marine expert had identified the shark as a blue shark, spotted it heading away from the swimmers and informed us it was safe to continue. I was getting a bit chilled sitting on the boat, so I thought that they must know what they are talking about and off I went.

As far as the ‘race’ was going, I was just swimming in my own zone. I had trained hard for this swim and I felt good throughout. If other swimmers were faster or slower, I wasn’t going to change my pace. There were no packs forming and everyone was swimming on their own. Mario, the super fast Portuguese swimmer, was way ahead of me as part of a relay team with Duarte Paulini.

At the finish point, marked by a boat moored just before the sheer cliffs of Desertas Island, it was all over. Slowly we found out about the other swimmers: the other two non-wetsuit swimmers didn’t finish, along with 4 wetsuit swimmers. I had managed to be the first solo swimmer overall in a time of 6 hours 4 minutes. The whole experience of swimming, training and racing in Madeira had been wonderful.

I will be most definitely be back in Madeira for other open water swims, and the calendar is getting busy with a series of swims on in November in additional to the endurance swims.

Madeira Island is located in the North Atlantic Ocean and is part of Portugal and is situated west and slightly south of Portugal. Being a popular tourist destination, there are frequent budget airline flights from the UK, with a flight time of under 4 hours. 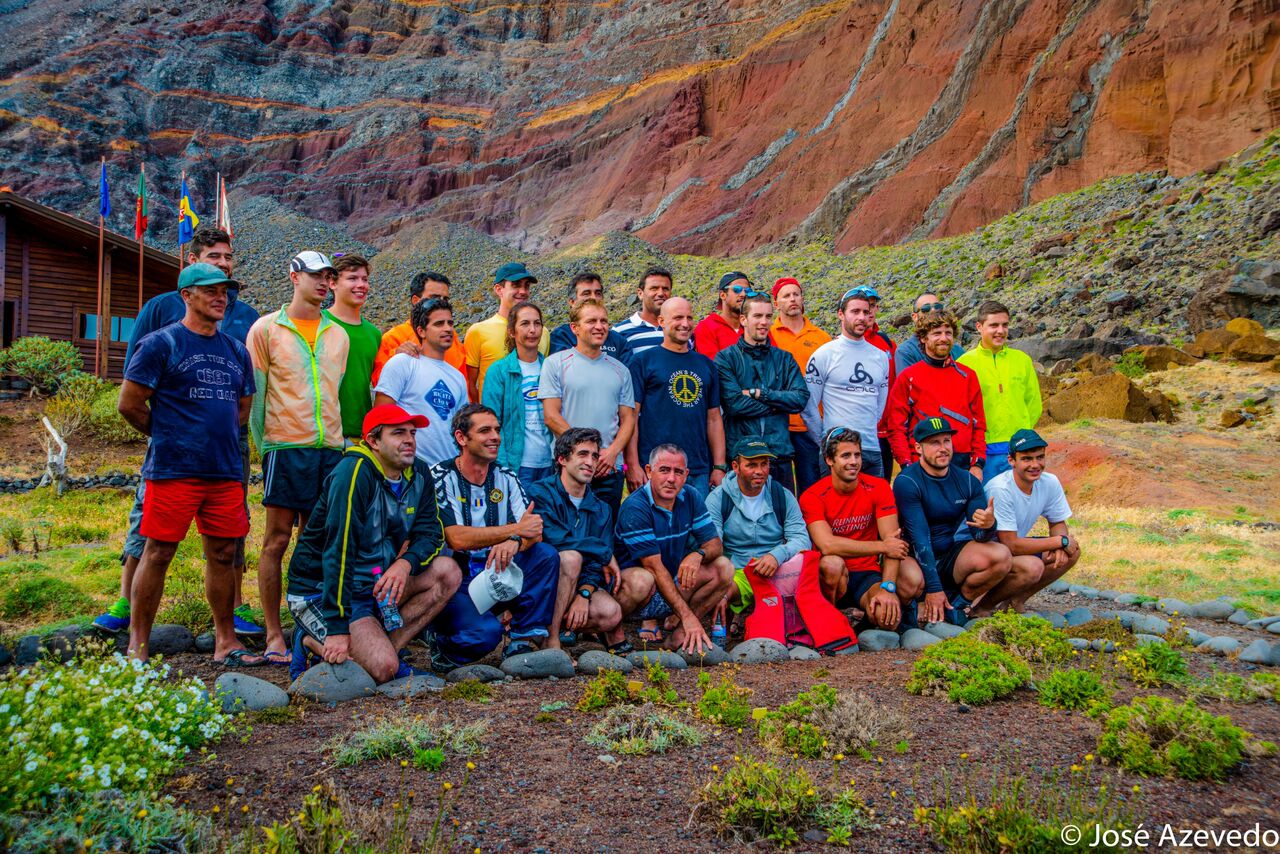