Steven Munatones 12/06/2015 Open Water Swimming No Comment
Courtesy of Nicolene Steynberg about the Madswimmers‘ The Big Swim on Mt Tres Cruces in Argentina.

Madswimmers completed their high-altitude charity swim at 5909m (19,386 feet) in a frozen lake on Mt Tres Cruces, a volcano in the Andes Mountains along the Argentina-Chile border in South America.

Yesterday, five Madswimmers did the highest swim in history in lake Tres Cruces Norte on the border of Chile and Argentina in the Andes Mountains at an altitude of 5909 m above sea level, 700 m higher than pioneer swimmer Lewis Pugh on Mt Everest in 2010.

To achieve this high-altitude swim, which was 700 meters higher than Lewis Pugh’s 1 km swim in 22.51 minutes on Mount Everest in 2010, the team spent 8 days hiking up and moving into position. But the final day was especially tough.

They woke up early and started a 1.1 km ascent through the snow at 4 am. After 6 hours to difficult climbing, the spirits remained positive, but the bodies were naturally taxed like never before.

The team laboriously used pickaxes to cut open a 30 cm thick layer of ice to prepare a wild swimming venue in the crater of this volcano.

Jean Craven, Herman van der Westhuizen, and Chris Marthinusen completed the 5-minute swim in water temperatures ranging between 0.5 – 2ºC (32.9ºF – 35.6ºC) in Speedos only. Evan Feldman and Milton Brest swam in wetsuits. Robert Graaff rendered support and Juandre Human also did not swim due to medical restraints. However, they all had to face a quota of serious challenges on this expedition, which most of them describe as the hardest they have ever embarked on.

Nicolene Steynberg reported, “It had been a long journey since the team left South Africa 12 days previously after months of focused training and mental preparations. The original plan was to swim on top of Volcano Ojos del Salado at 6400 meters, but Mother Nature prevented Plan A as the lake was solidly frozen. They changed strategy on Day 3 of the trip and headed towards Mt Tres Cruces, the sixth largest peak in the Andes.

The team summited the crater at 6,014 meters on Day 8 and swam on the same day. The ice-covered layer of the lake was 30 cm thick and the chain saws they carried with were too weak to cut open a swimming venue at that altitude. Eventually the team reverted to old-school pickaxes. Like miners, they went at the hard core of ice and picked and tore apart a small hole in the ice. Without oxygen tanks and after 8 days of tough hiking, occasionally through near vertical snow fields facing extreme cold (-18ºC at night), the team literally lived up to its name, Madswimmer
.”

The swimmers were supported by Doctors Sean Gottschalk and Darryl Wood, specialists in altitude acclimatization and hypothermia, tour guide Sean Disney of Adventure Dynamics International, 4 support climbers and Charl Rorich, the cameraman who documented the swim. Craven said, “The professional support of this team has been an indispensable part of our journey.”

Madwimmer is a registered South African charity that raises funds for various children’s charities by doing daring open water swims. During its 7 years of existence, it has paid out in excess of US$420,000 (nearly R6,000,000) aimed at changing children’s lives. For more information, visit www.madswimmer.com. “100% of all donations benefit charity – every rand,” promises the team. 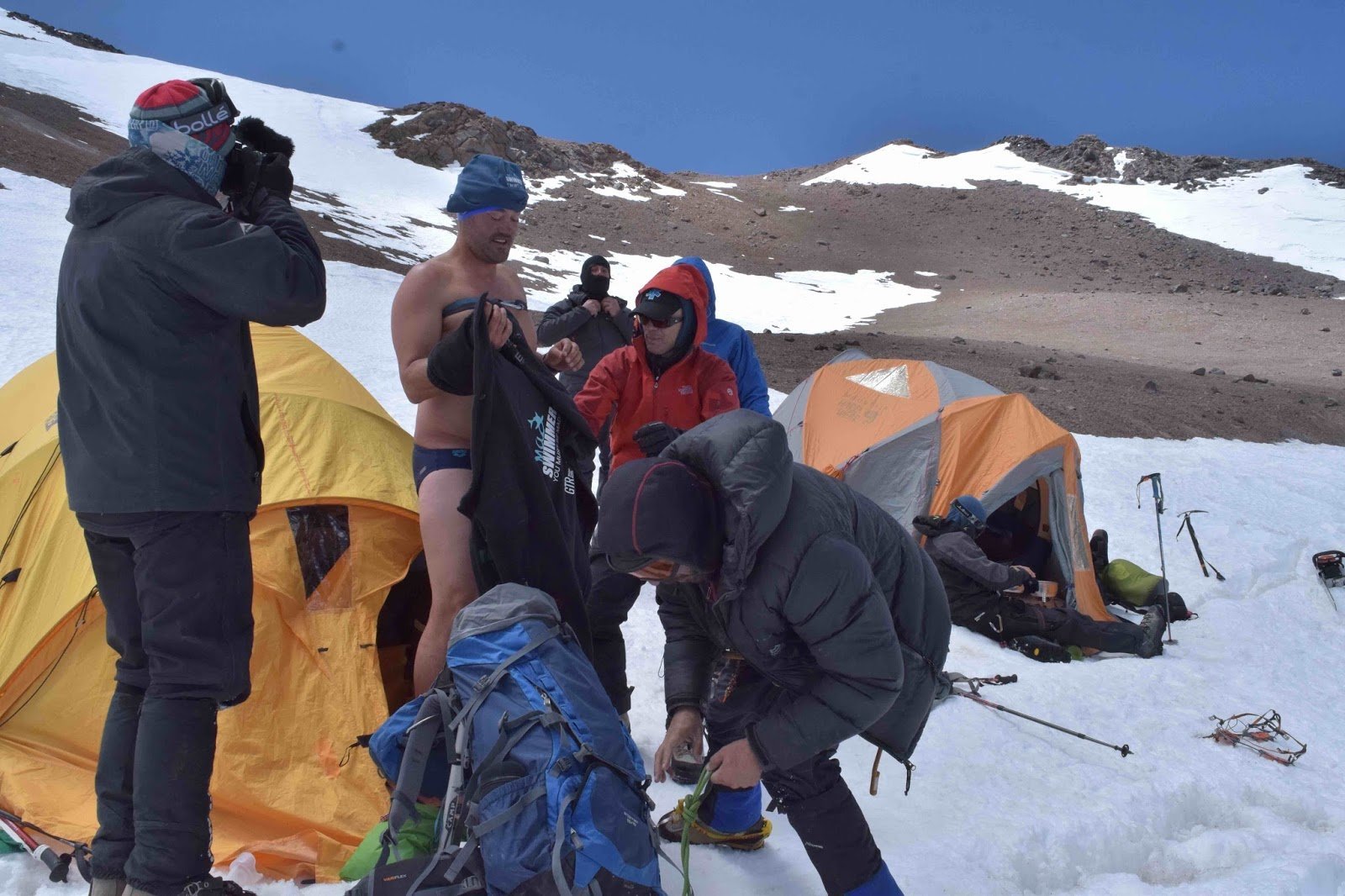 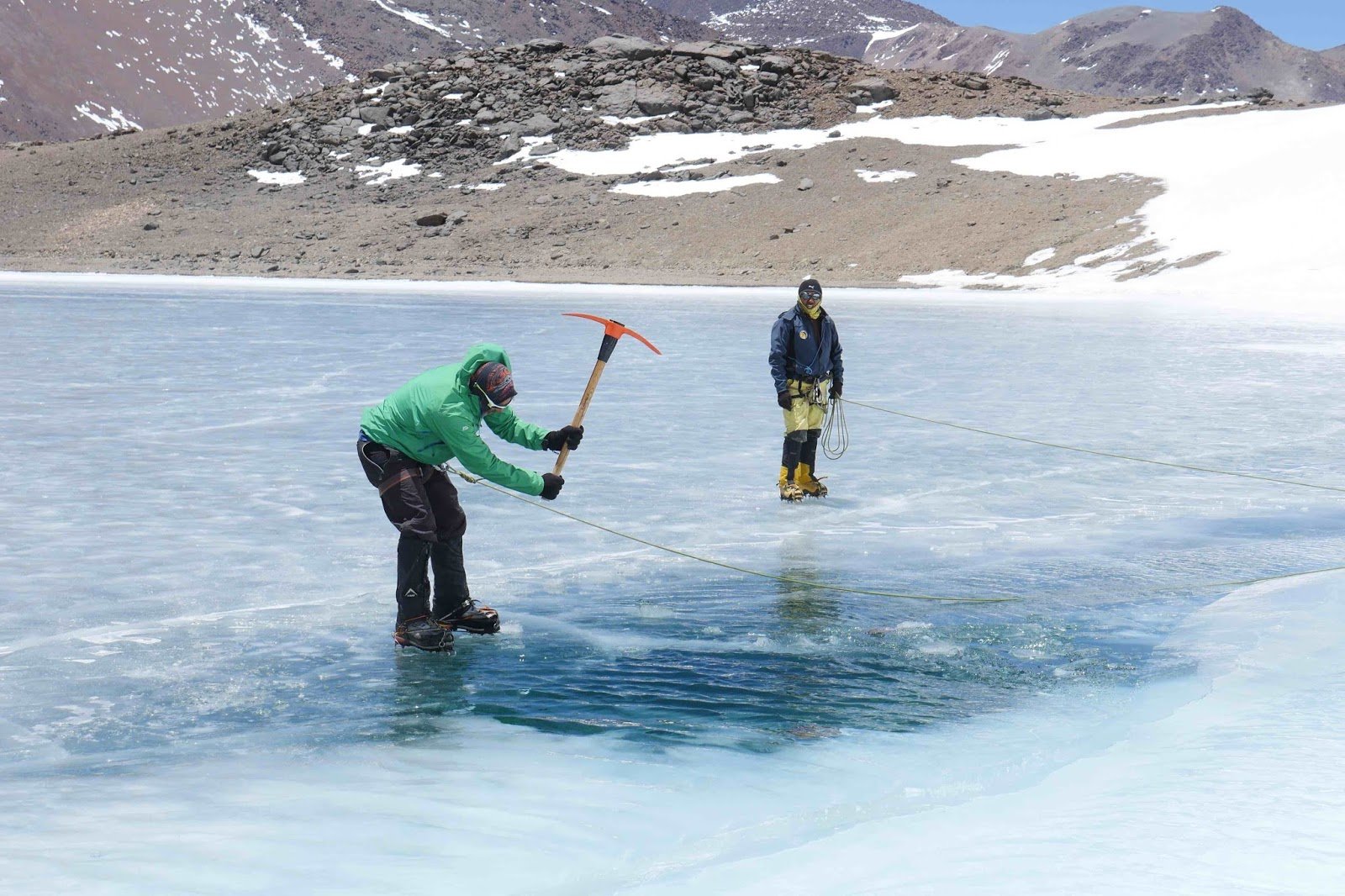 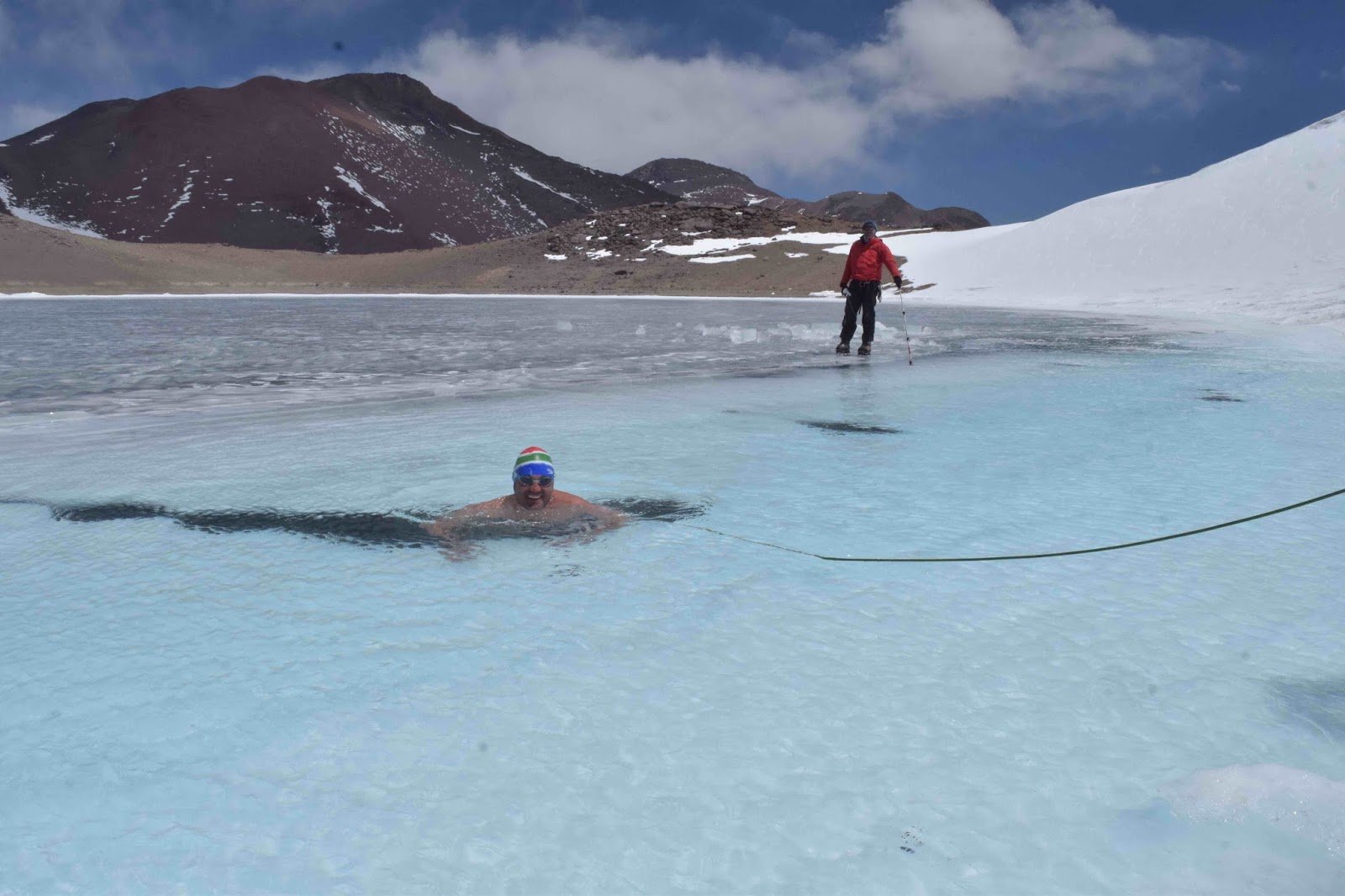 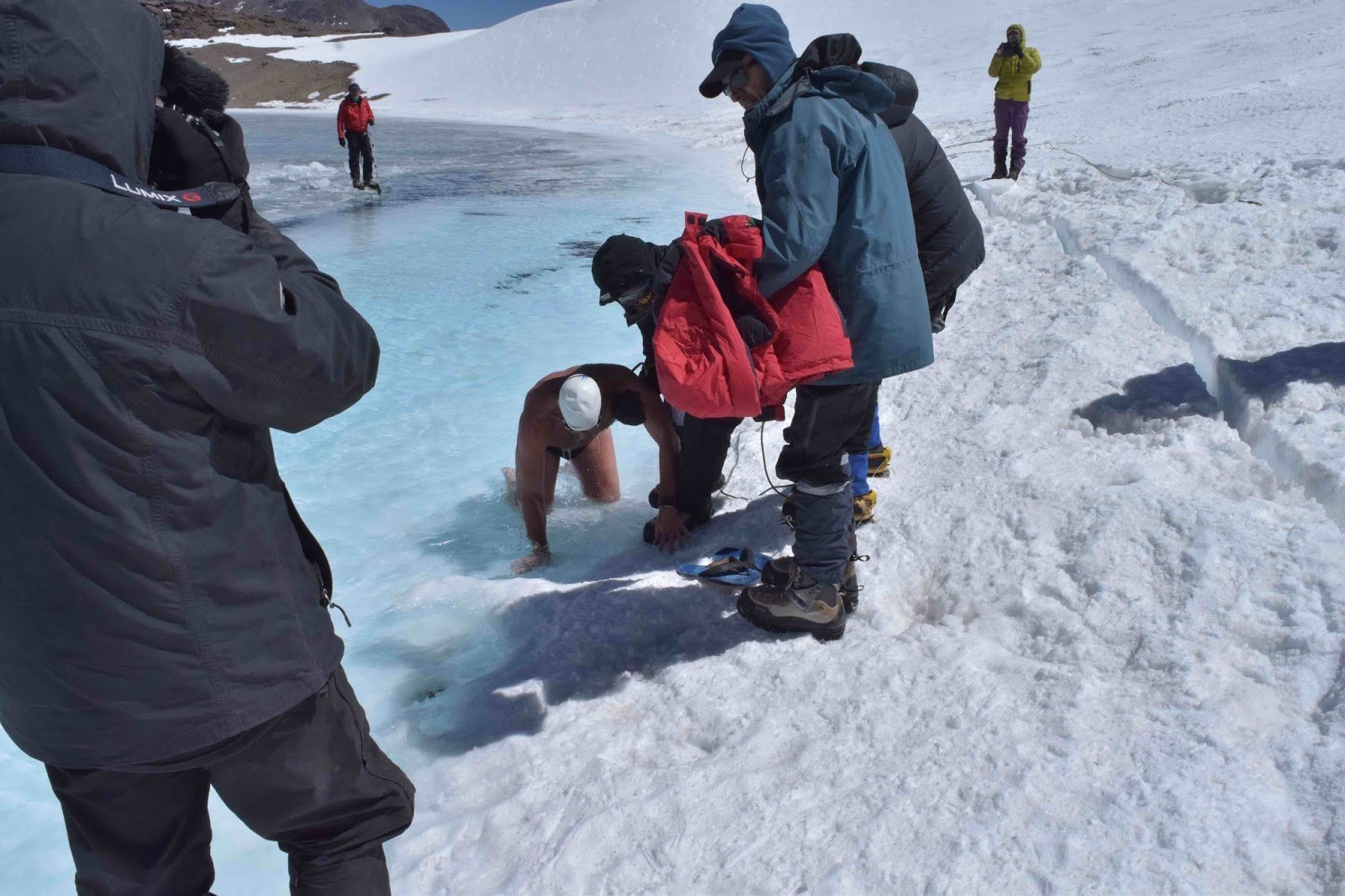 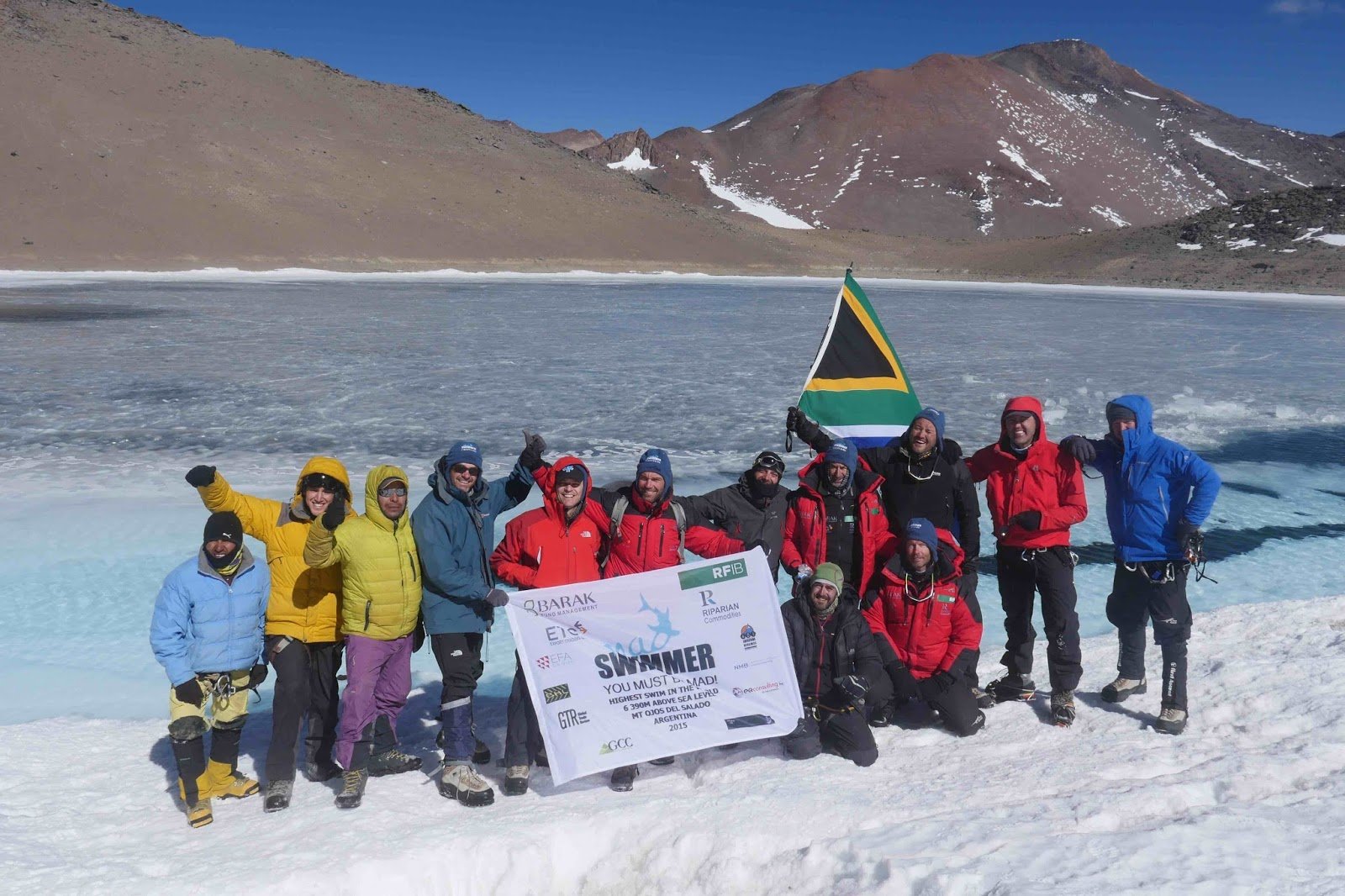 Their charitable efforts are nominated for the 2015 World Open Water Swimming Offering of the Year award that recognizes unique products, services, events and organizations that offer an exceptional twist and extraordinary value to open water swimmers around the world.