The Magic Of Open Water Swimming By Ram Barkai

Ram Barkai, sponsor of the tough 7.5K Cadiz Freedom Swim in South Africa, will speak on the The Magic of Open Water Swimming at the 2010 Global Open Water Swimming Conference in Long Beach, California. As part of his presentation, he will also show a film about his extreme cold-water swims in Antarctica and Lake Zurich.

Similar to Lewis Gordon Pugh and Lynne Cox, Ram is one of the world’s few truly great cold-water swimmers. Ram says, “Training is the most difficult and nauseous part of his cold-water attempts. It reminds me to respect the cold water with every stroke. When you are swimming on the edge of the human’s ability to cope, you have no idea when your body may give in to the cold.

It always looks warmer on the outside once you ‘defrost’. Cold-water swimming is usually shorter than long distance swimming due to the extreme risk involved and the limitations of the human body.”

Ram’s Swim in Antarctica was held on February 7th 2008 on the last day of the Antarctic summer at 70° latitude near an Indian Scientific station named Maitri. Ram and his team had to hike for 1½ hours through ice

and rocks to reach the lake where he would attempt his swim. Ram found a lake with 1°C water while the air hovered around 0°C and he swam 1K.

When asked why he did it, Ram said, “Looking back, I am not sure why I did it, but hell, I am ready to do it again and even maybe try it over a longer distance. I have always been fascinated by the human mind and 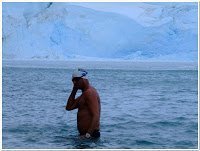 its ability to push the body far beyond its perceived physical limitations.” [Photo on left shows Ram doing a warm-up swim, but that term is used in a figurative sense.]

But entering into 1°C water requires a lot more than physiological and mental preparation. As Ram explains, “The logistics around the swim was a real challenge in itself. 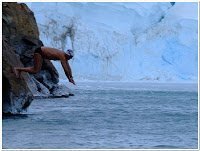 No one prepares you for the difficulties surrounding such an attempt in Antarctica. It is basically a huge desert of solid ice. No roads, airports, transportation or any kind of formal assistance. Everything depends on the hospitality of the people who run the scientific stations that control Antarctica. You also need significant amounts of money to fund the project. However, the Russians and the Indians were extremely hospitable and accommodating and together with Patrick Woodhead 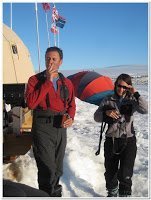 and his team we managed to get there, find a lake, swim it and come back with only a few numb toes.” [See photo on left]

But, the long-term affects of his swim took on various forms: it took Ram 3 months to get the sensation back in his toes, albeit not 100%. It was clear that the swim required the ultimate in mental preparation. “Diving into the 1°C water seems like madness now; however, I remember being so focused that I didn’t really feel the cold, just pain and lack of co-operation from my hands and feet. The water felt like a solution, thick and milky.

I had to start swimming immediately without stopping for a second. I constantly had to generate heat and when I turned, it took me 2 to 3 minutes to get back into my stroke. Breathing was especially heavy, I expected it and remembered that the most important thing is NOT TO PANIC. Slow deep breaths, long strokes, no sprinting or hyper ventilating, just trying to get into a rhythm I can keep going for as long as my limbs obey my brain.

I was so focused internally on each and every stroke and breath that time went by very quickly. After around 600 meters, I started to feel my limbs getting heavy and less cooperative. It is a very frustrating feeling when your stroke seems to be perfect – in your mind – and you are moving at a snail’s pace.

The doctor told me that surviving stage 1 and 2 [of hypothermia] is great, but stage 3 is dangerous and the risk of cardiac arrest increases rapidly after 15 minutes. It is not something you feel developing slowly and then decide to stop it, it just happens and the odds of recovery from cardiac arrest induced by hypothermia are quite slim.”

“I started to feel dizzy and unfocused, I knew that my arms felt very heavy and my stroke was extremely inefficient. The last 100 meters were a little hazy. I knew I made it, but I had to get to the end and I couldn’t really walk or talk. The team helped me into a small expedition tent to warm me up. I wasn’t feeling great. I was frozen and feeling nauseous. I couldn’t drink, but I was very thirsty.”

“It took me around twenty minutes to come back to reality, dress back into Antarctic gear and step out the tent. I felt delirious and in desperate need for a single malt to celebrate my success.”