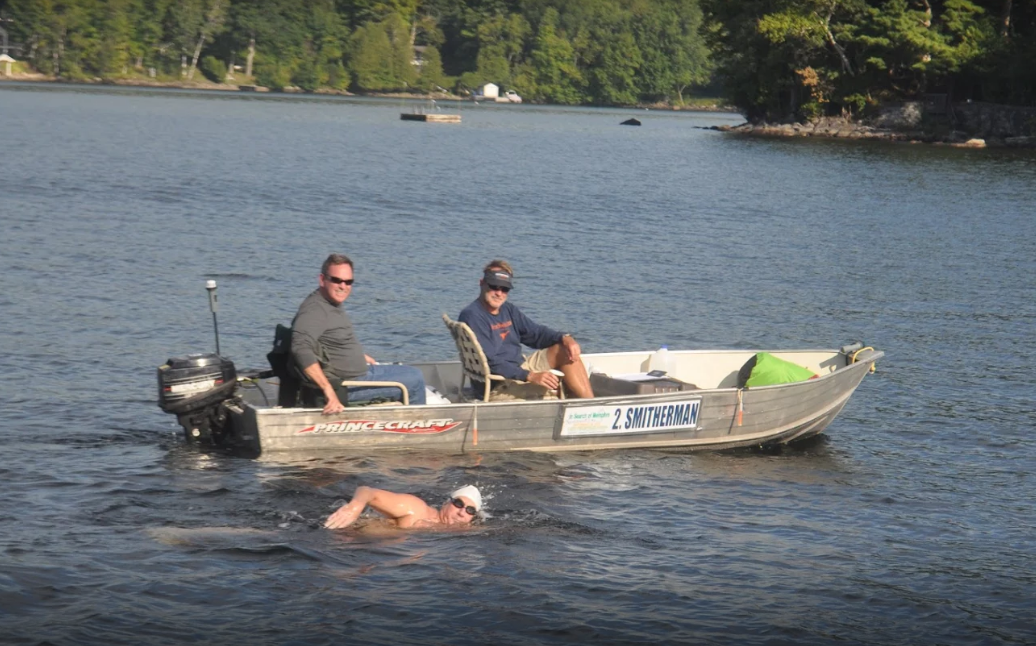 On September 10th, 58-year-old Dr. Mark Smitherman of Florida completed In Search of Memphre, the 25-mile border-crossing swim the length of Lake Memphremagog between Newport, Vermont in the United States and Magog, Quebec in Canada.

Dr. Smitherman, nicknamed Magoo, left from Newport City dock at 12:20 am and stepped ashore in Magog 13 hour 46 minutes. He was supported by two friends, Joe Lain and Chris Burke in an aluminum boat with a caged proproller provided by Traversée Internationale du lac Memphrémagog. Additionally, Don Houghton, Jr. was in his kayak while Mark Whitt operated a 16-foot dory alongside. In the pontoon boat in the Magoo flotilla were escort crew members Nelson Villatoro, Amanda Hunt, and Phil White.

39-year-old Nathaniel Dean of Massachusetts also joined the swim and swam 12 miles through the night. “He was just south of Georgeville when he cramped up and was forced to pull,” reported White. “He was supported by Daniela Klaz, Katherine Owen, and kayaker Gary Golden.”

“This was the sixth year we have held In Search of Memphre. Seven swimmers have already signed up for next year’s Search, which has a cap of 10 swimmers,” explained White.